The Very Best Of Rick Jones 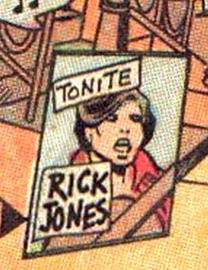 If you look around the blogosphere, Rick Jones' singing career doesn't get a whole lotta love, but me, I adored every bum note and overwrought lyric.
Come on, was there ever a more fun continuing sub-plot than Rick Jones becoming a folk rock singer? In the midst of comics' relevancy boom, when every costumed cut-up suddenly got interested in pollution, the population explosion and the plight of the American Indian, Rick wrote the soundtrack, man.
He'd been on the road, he'd seen the real America, he'd even been to outer space, and he was gonna tell us all about it, in song.
It all started, near as I can figure, in the pages of Captain Marvel #18, just after Rick and Mar-Vell had first got stuck together in The Negative Zone ( which would probably be the title of one of Rick's albums ).
Here's his debut, and it's fulla all kinds of rock and soul. Not that our boy takes heckling well... 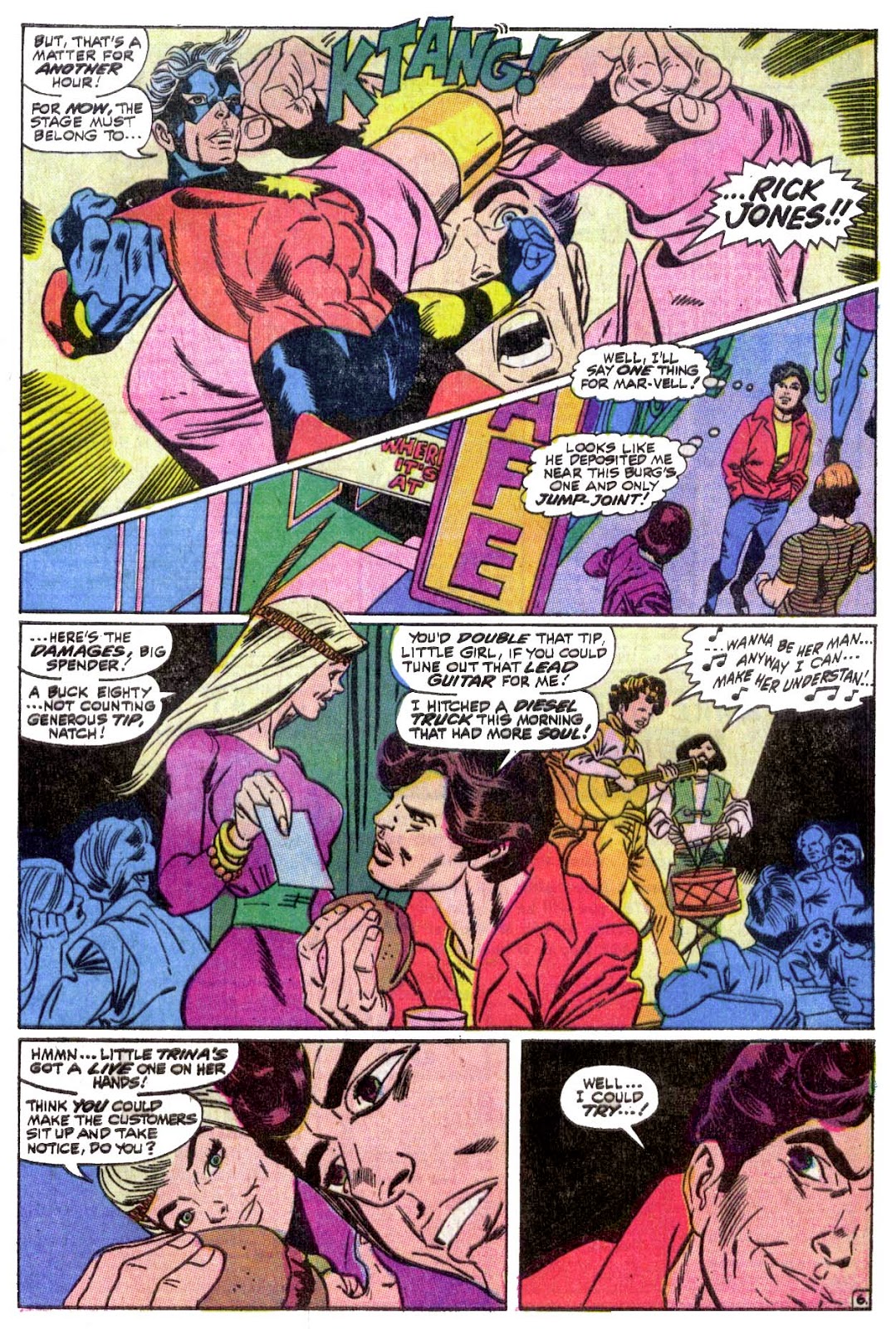 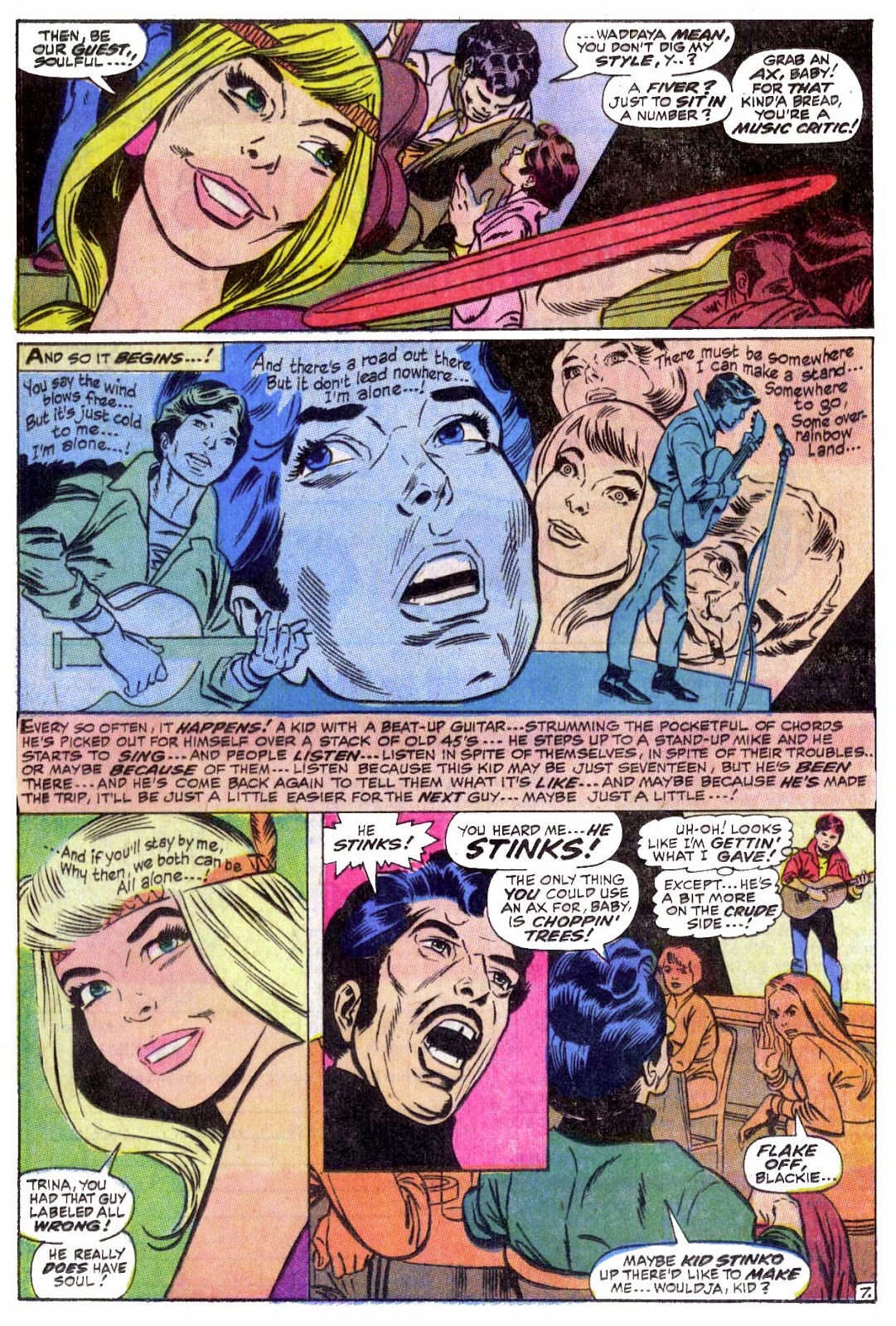 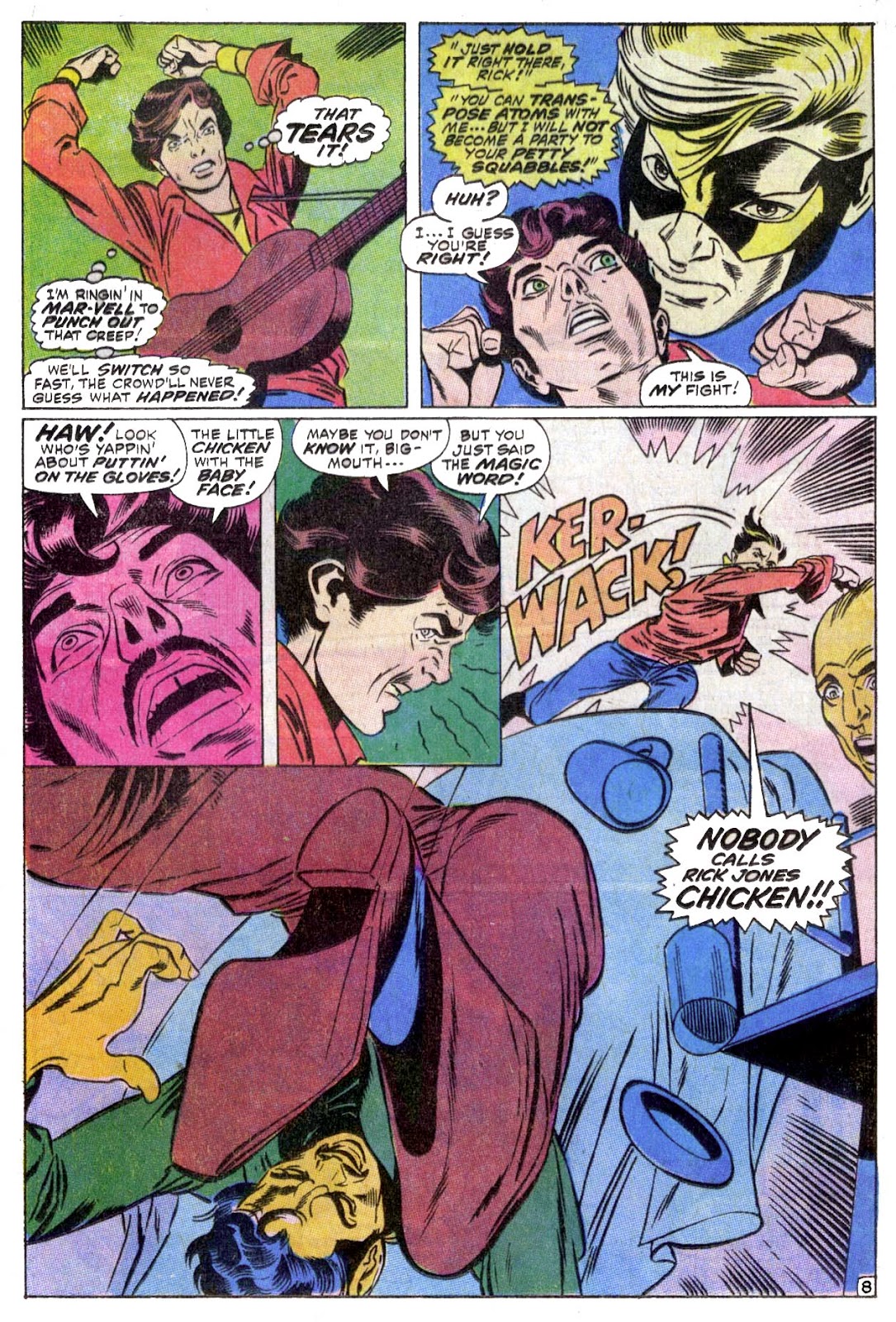 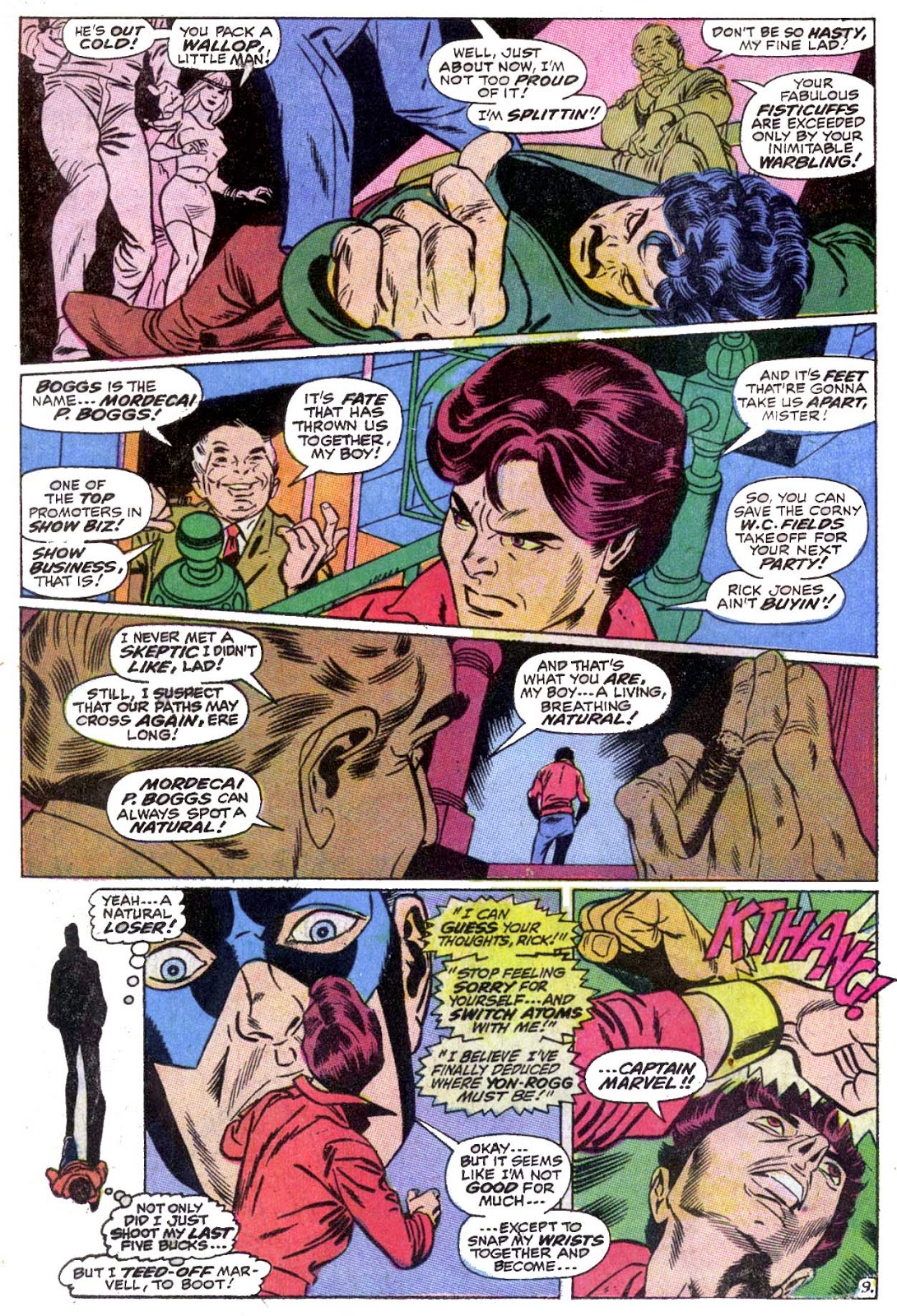 By Ish #20, Rick had already made it to the big leagues, sort of, appearing in an unnamed coffee house in Greenwich Village, and wowing those guys and gals. Mordecai P. Bloggs still wanted to sell his sound to the masses, but Rick's music's for the people, there's no way he's selling out to The Man. 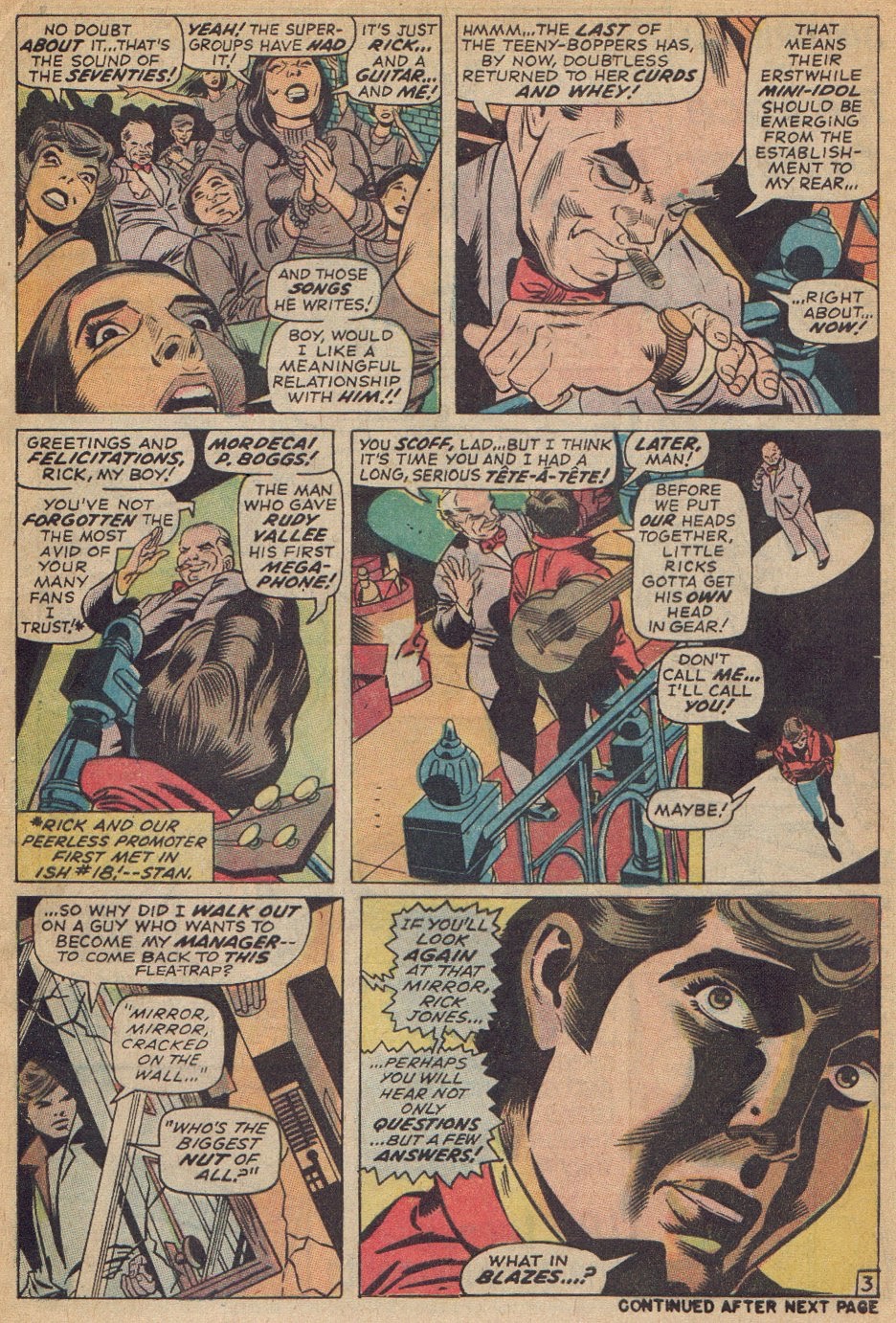 Oh wait, by the next issue he's changed his mind. What a breadhead. 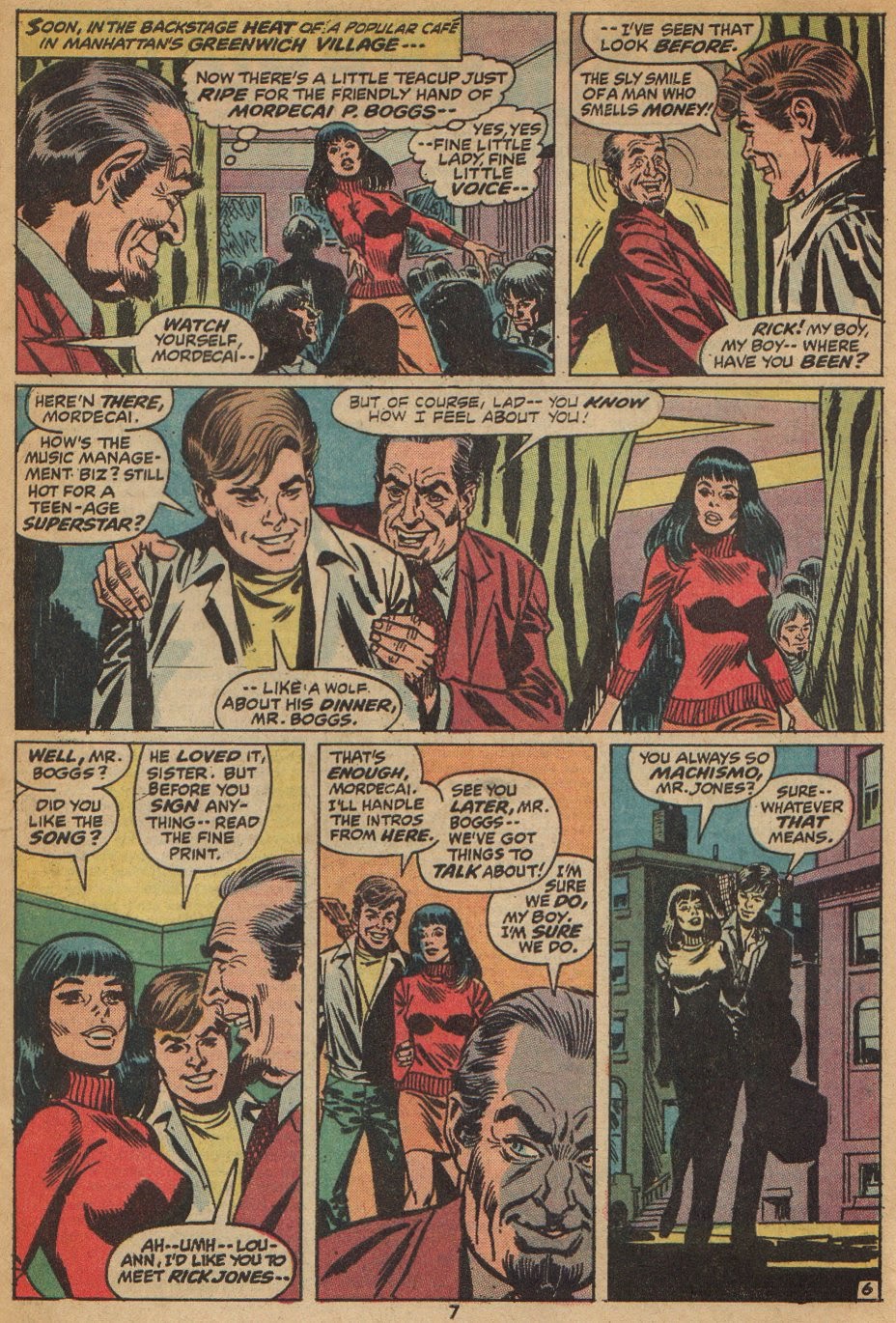 But he does make time for one last appearance before The Kree / Skrull War: 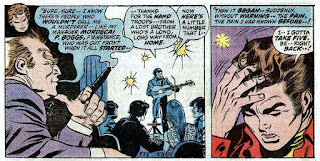 And never one to pass up the chance to pick up a new fan, Rick even invites Subby to his next gig. That'll end well. 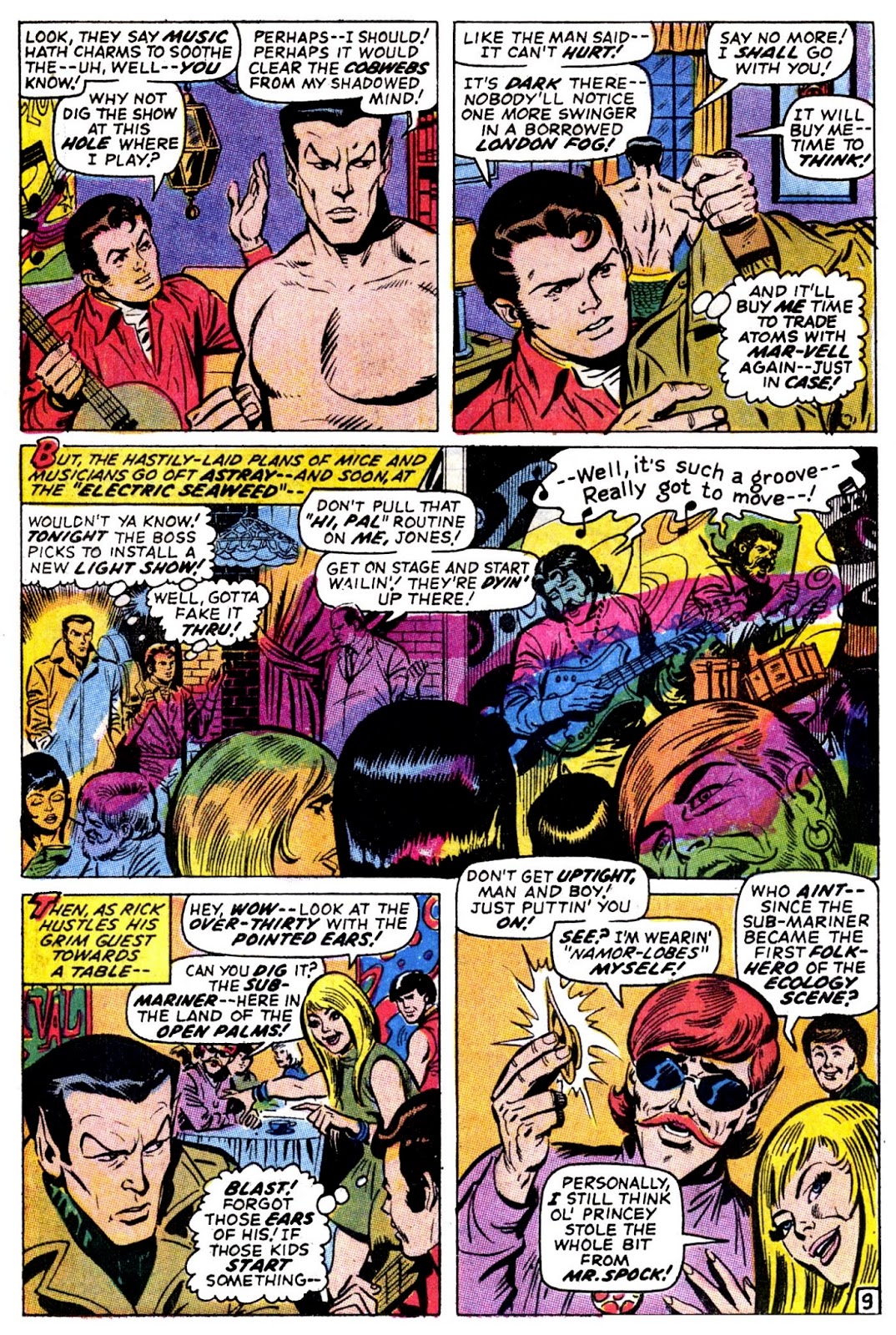 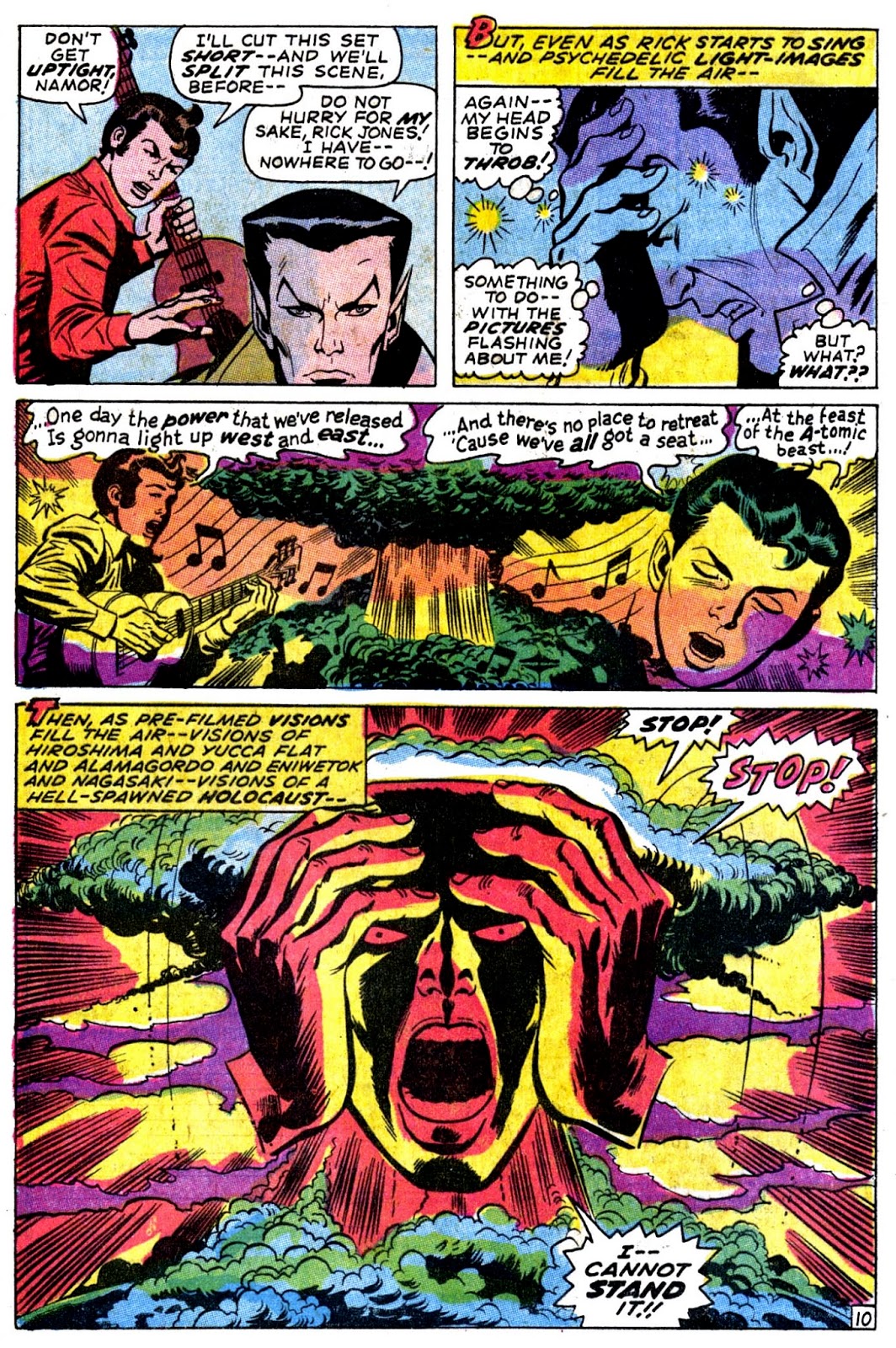 Rick's career stalled for a few issues after this, as he and Mar-Vell went off and got involved with Thanos, The Destroyer, The Avengers and Jim Starlin for a good long while, all of which must've given him a couple of concept albums worth of material.
Back on Earth by issue #30, Rick hitched up with his erstwhile manager again, in a sinister meeting that always seemed to be leading somewhere that didn't actually happen. In fact, manipulative Mordecai was often presented as if there was more to come about him, but strangely, there never was. 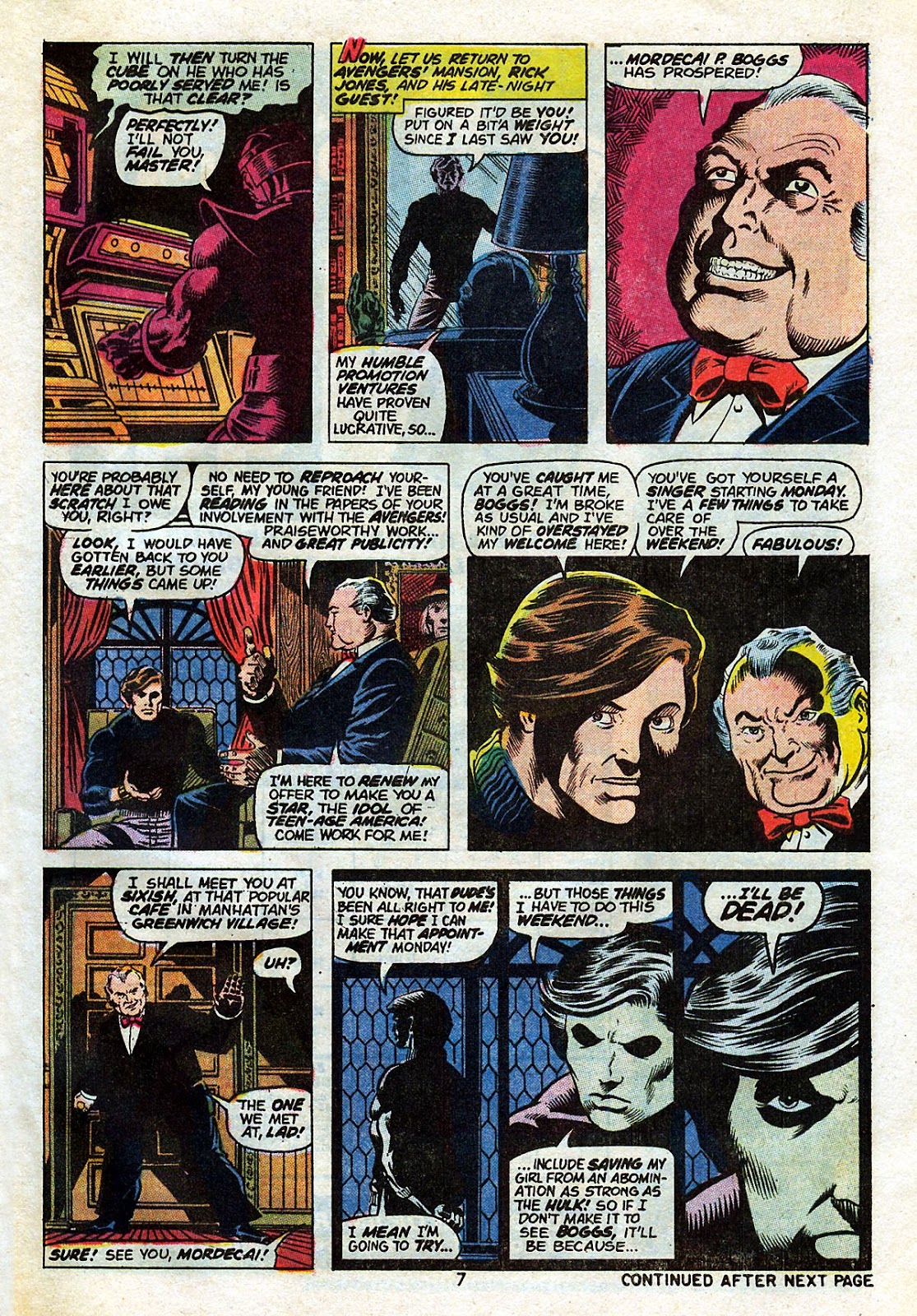 Mind you, he does railroad our boy into forming a duo: 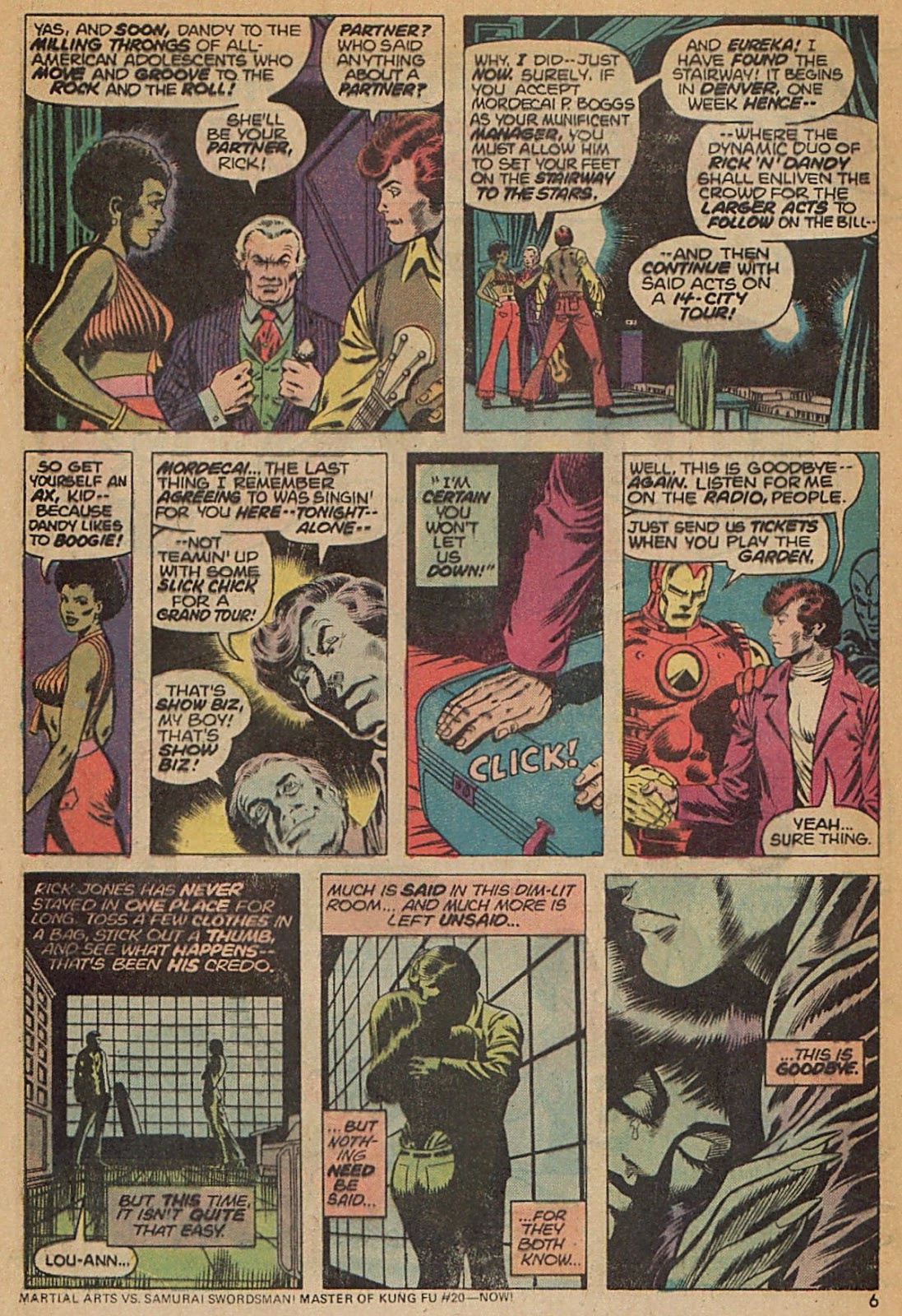 And Rick realizes that fame, fortune and chicks is much more important than saving the universe: 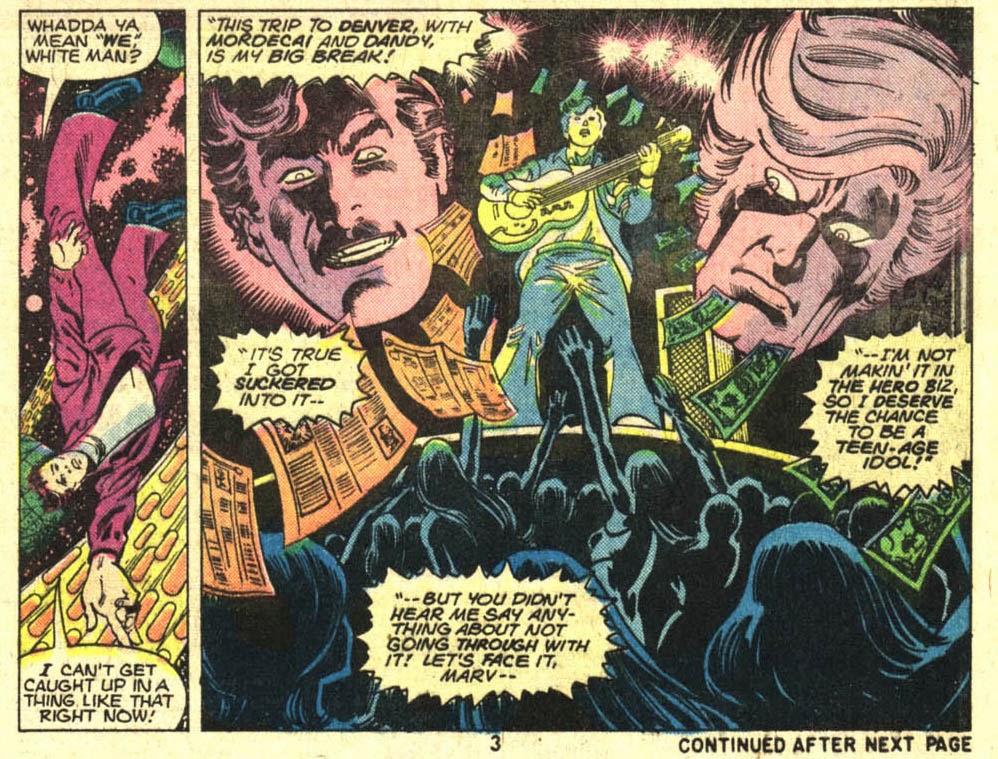 But uh oh. Is our nascent superstar succumbing to the lure of hard drugs already? I mean, he hasn't even played a gig in months. 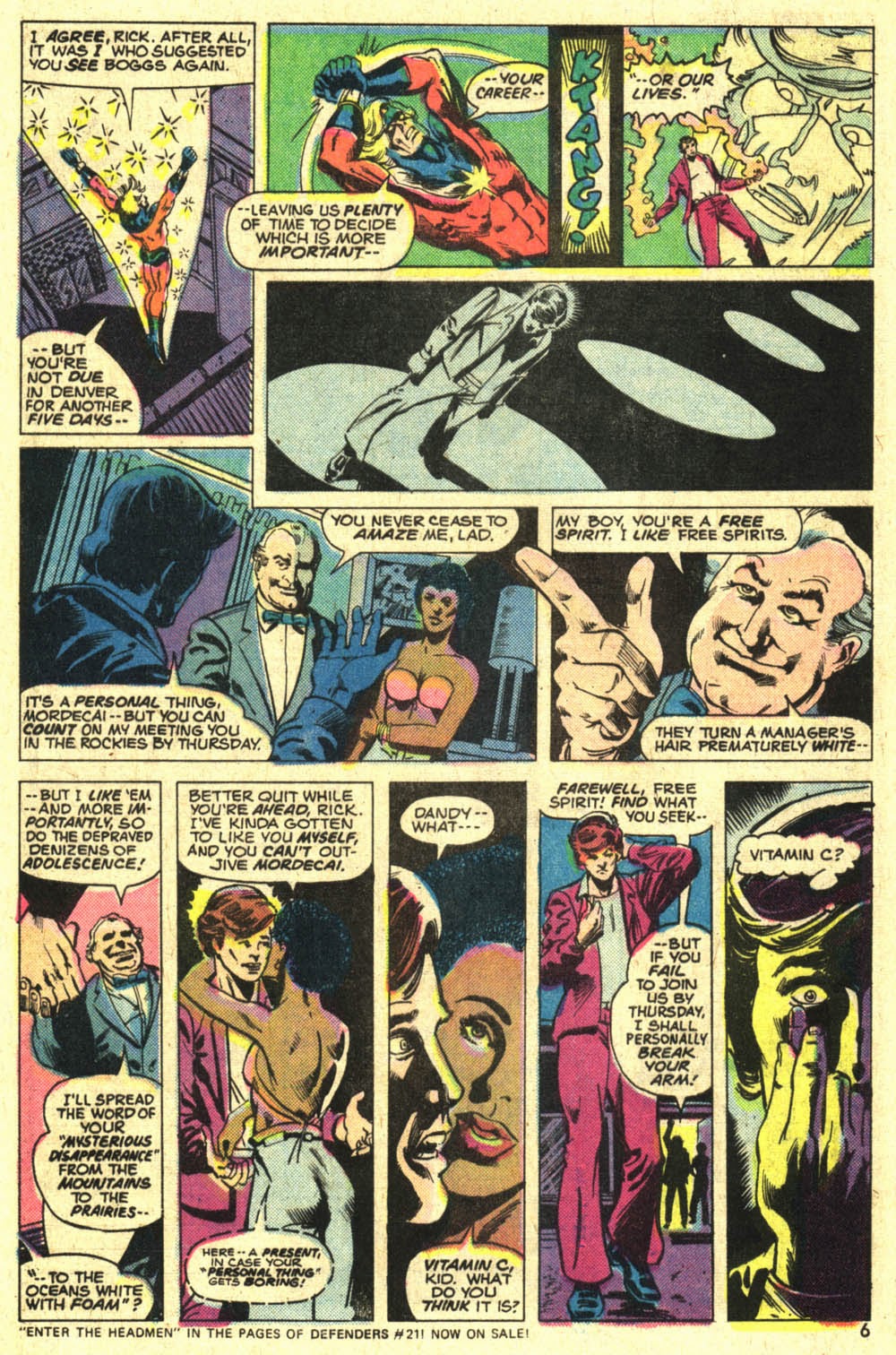 Finally though, Rick does get back on stage, in an amazingly packed auditorium considering he's an unknown who's only ever done a coupla' gigs in his life. Maybe not the best idea, though, to turn up in the same outfit you've just got back from outer space in. 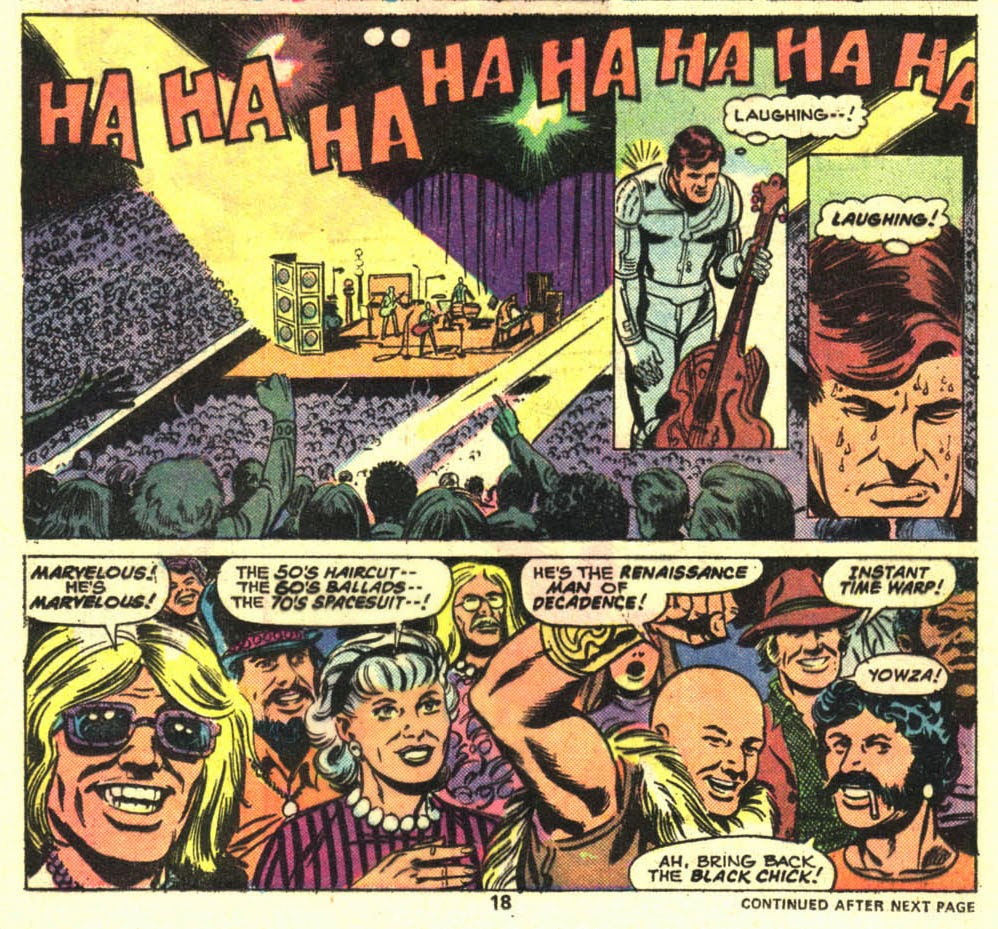 Still, as stage acts go, this is up there with The Who or The Jesus & Mary Chain:

So after that debacle, Rick took some time off, to get back to what mattered. The music.
Good evening, everybody, this is my new direction. Hope you like it. 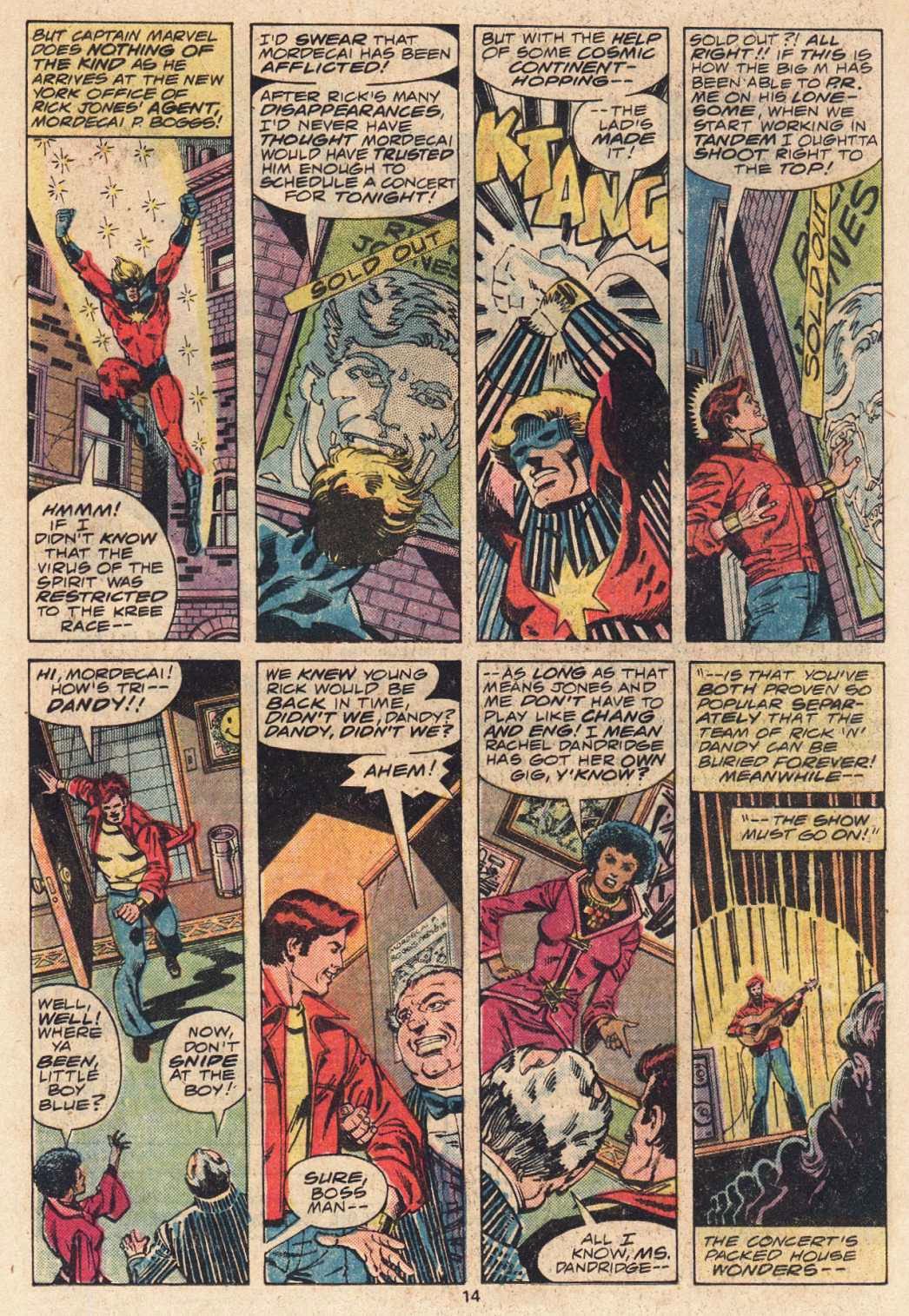 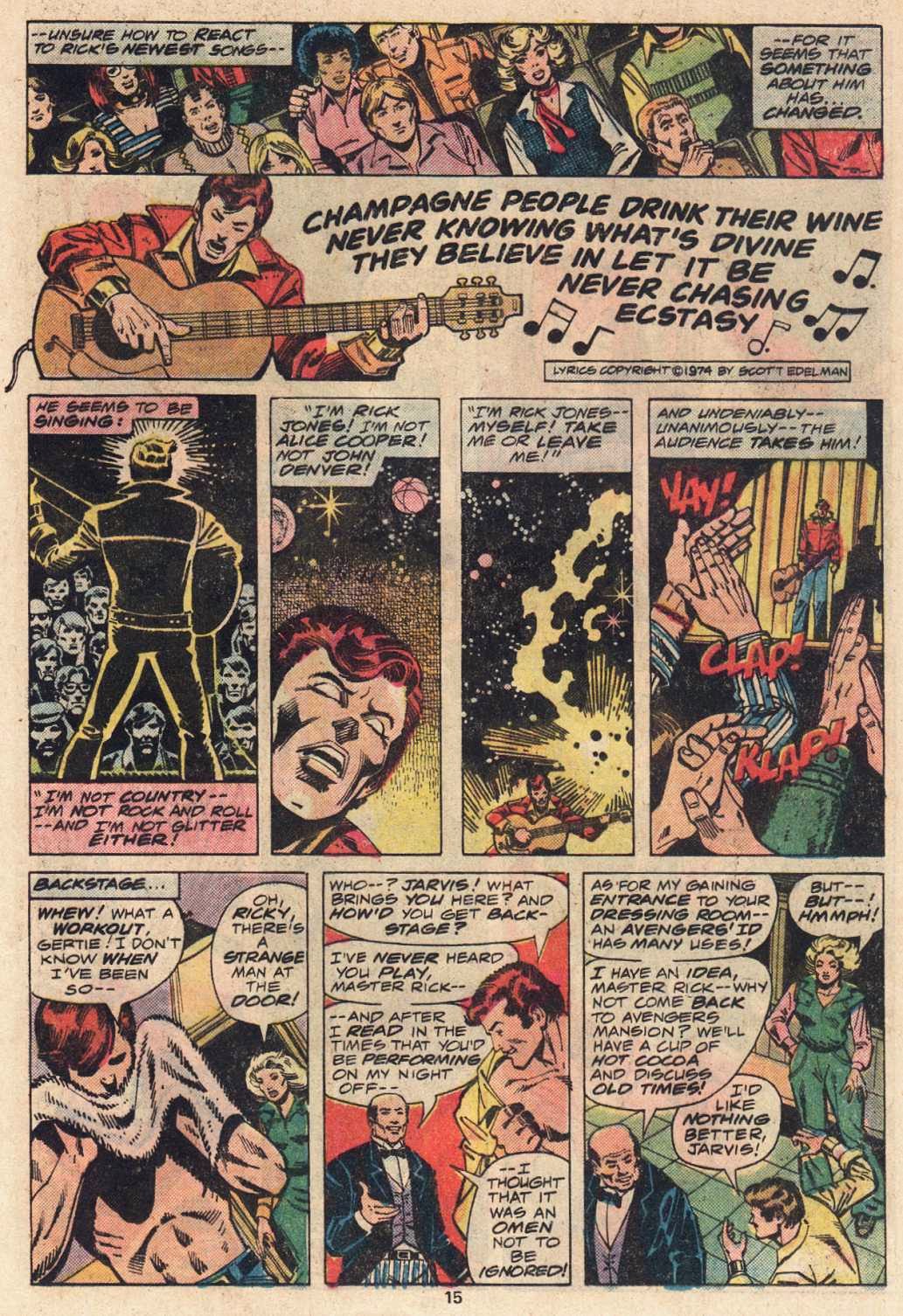 And that was it for the Jones boy's music career, as far as I know. Not even a supporting slot on tour with Doug Wildey's Ambler. But Rick spoke to us, man, he was the voice of our generation.
All I'm saying is: I want Rick Jones in the next Avengers movie. And I want him singing.
Mind you, these days, he'd probably be wearing his baseball cap on backwards, and listening to that there hippety-hop, or whatever it is the youngsters like.
Posted by pete doree at 02:42