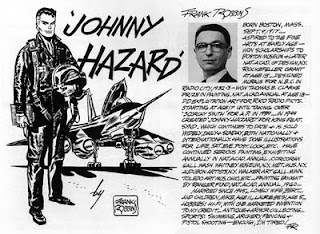 I don't think anybody polarized opinion more during The Bronze Age than Frank Robbins. Amongst my comic reading friends at the time, pretty much everybody absolutely loathed his work. Me, I liked it, if only to annoy those selfsame friends.
At least, I liked it up to a point. If I knew Frank was doing a book regularly, like say The Human Fly or The Invaders, well ok, that was fair enough. I had the choice there. It was when Marvel cheated that used to annoy me. Y'know, like getting Gil Kane to do the cover of a book you bought regularly ( 'cos I'd buy the phone book if it was illustrated by Gil ) then sneakily getting Frank in for that one issue to do the inside.

So why didn't some people like Frank's art? Here's a few quotes I'm sure we all heard at the time: His people look like they're made out of rubber! or The human body can't make those kind of contortions! or howabout Everybody looks like they're covered in slick black grease! or even the ever popular His art is just so damn ugly!
Even Frank's biggest fans would have to agree with at least one of those, and I'm as guilty as anyone else, there were times I thought his stuff was hideous, but y'know what I think it was, really?
I think the real issue was the kind of assignments he was given. Let's look at his great newspaper strip Johnny Hazard for starters. 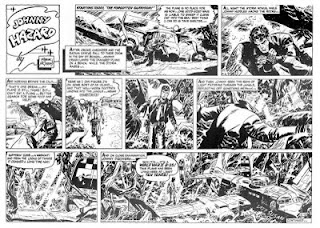 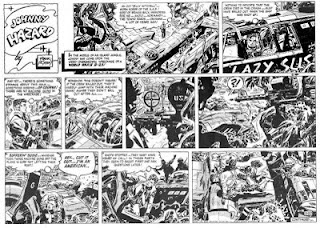 Now, in anybody's eyes that is brilliant work. Sure, it reeks of Milton Caniff, but what cartoonist of Frank's generation wasn't a Caniff disciple at one point or another? Even if you don't like the style, you can't argue with Robbins' storytelling chops or his sense of design.
Of course, It was when he hit Marvel that the naysayers came out in force, me included. But don't forget, both Stan & Roy were thrilled to have him there. Here they are at a con in '74, just as Frank had been inducted into The House of Ideas. 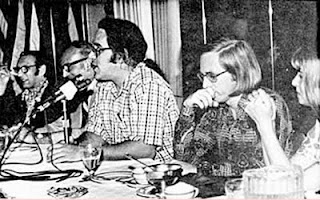 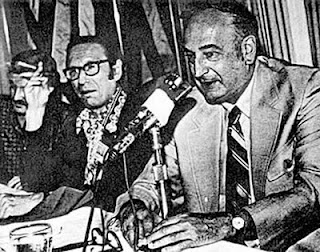 Here's the thing, Frank was an arch stylist and a uniquely individual artist. What he wasn't was a superhero artist, at least not in The Mighty Marvel Manner like, say, the Buscema's. Take a look at his Cap & The Red Skull. 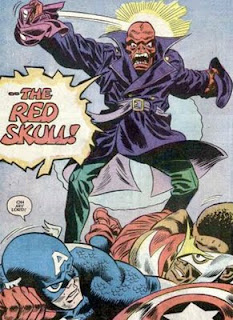 Brilliantly frenetic, yes. Almost a fever dream parody of the Marvel style, in fact. But not really that style. Not what we were used to. We wanted our heroes to look like heroes, dammit, not coke addicts in the throes of withdrawal. Or how about Frank's contribution to Steve Englehart's classic Nomad phase of Cap. 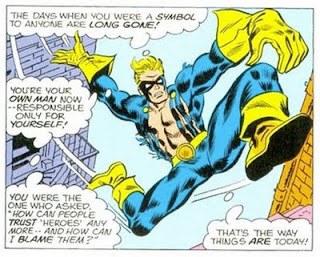 I love that panel now. At the time, I know for a fact I hated it. Nomad was the best, coolest idea anyone'd had in ages for Cap, and here was Frank Robbins ruining it! 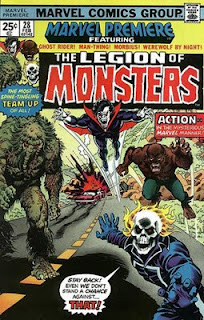 But in a sense it wasn't his fault. He was obviously trying his best to adapt his idiosyncratic style into material that didn't suit it. Take that issue of Marvel Premiere there. Alfredo Alcala should've done it, or Mike Ploog at the very least. 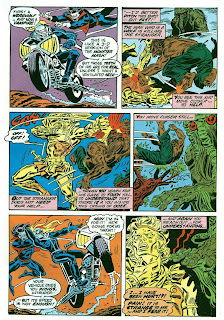 Frank did a great, surreal job, but he just wasn't the right artist for the project. And I'd've said the same if Big John or Jim Mooney had got the job. I'm not saying Robbins couldn't do horror. Just that it didn't feel right. Or howabout the regular series he did, The Invaders. With hindsight, I can see how much fun Roy Thomas' love letter to The Golden Age was, ( tho' I suspect it was more fun for Roy than the readers ), but at the time, it was second only to The Human Fly for me and my friends in the area of 'last book in the shop you'd buy & then only if there was nothing else.' 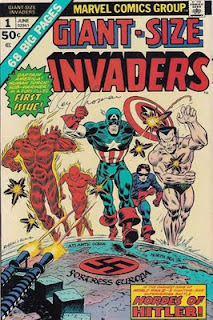 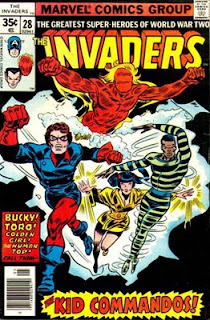 Never particularly cared one way or the other about Cap, and wasn't even vaguely into the original Human Torch & Toro. Liked Subby, but he was much more fun over at The Defenders, where he stormed off like a petulant teenager each and every issue. Oh, and Bucky was interesting 'cos technically he was dead. But no, just didn't care. And as much as I enjoyed pissing my friends off by admitting to Robbins love, I didn't like him enough to invest in a series by him, particularly with characters I didn't give a stuff about.
Always liked that issue of Ghost Rider Frank did though, the one with The Phantom Eagle, even if it did come with a classic 'cheat' Gil Kane cover. 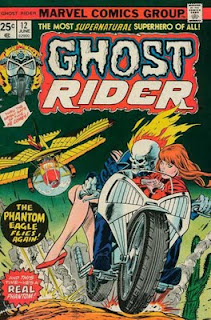 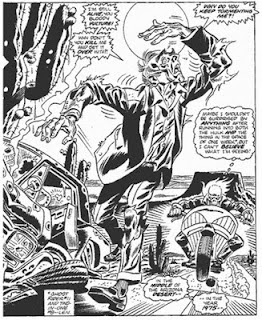 Interestingly, over at DC, Frank seemed to get a little more respect. He wrote tons of great Batman stories, of course. Though again, his version of The Caped Crusader was just too wrong-headed for me. 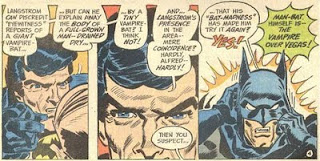 Like all of his characters, Bruce here seems on the verge of a nervous breakdown, yet another thing fans didn't like about Frank's art. His people were always frantic and sweaty, even when there was nothing to be frantic and sweaty about. And again, Bats looks like he's completely made out of rubber, even before he puts his cowl on.
But, on the flipside, there's his work on The Shadow, where's the Caniff inspiration is to the max. For instance, here's one of the all-time great covers ever done by anyone. 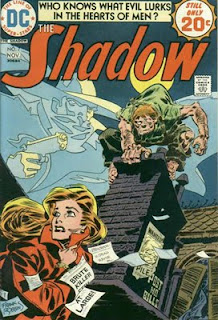 An absolute masterpiece of design and style. And here's Frank showing how good he is at sweaty Nazi's & sexy chicks. 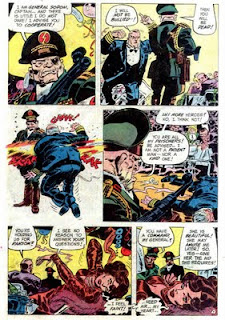 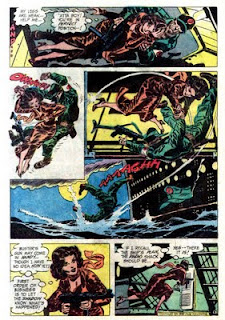 He drew kinda foxy women, it must be said, even if they moved in ways only a russian gymnast would find appealing.
I think for all the work Frank did throughout The Bronze Age, where his style really worked was in the humour pieces. He was a cartoonist, as opposed to an illustrator, and in the pages of books like Plop! the insane bodily contortions actually worked. 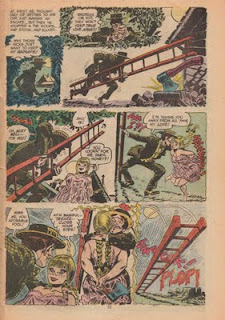 I still don't think I could say I loved Frank Robbins' work, not like I love Chaykin's or Cardy's, to name but two, but I certainly don't recoil from it like I might've back in the '70's. It's bizarrely fascinating in a way, and if Twomorrows feel like doing a book about the guy, I'll be there, tripping over my legs going in six different directions to get it.
Posted by pete doree at 10:57