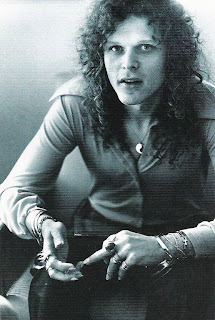 Today would've been the birthday of The Pop-Mystic Transvestite, One Man Band, Tao-Toon Fool, Wizard, Western BodeSattva, High Conscious Comedian, Laughing Light and Cartoon Gooroo otherwise known as Vaughn Bode.
Ideally, today would be marked by some sort of worldwide celebration where the planet's population indulged in ridiculously inventive sex and ingested gargantuan amounts of psychedelic drugs, all while pondering it's place in the universal reality, probably on top of a mountain somewhere.
If you're planning on doing any of those things today, just remember, you're doing it for Vaughn.

Da Bode's most famous creation is, of course, Cheech Wizard, the perverted, bone idle, drug-fuelled con-man in a battered magic hat who, almost against his will, does actually possess some degree of cosmic insight. 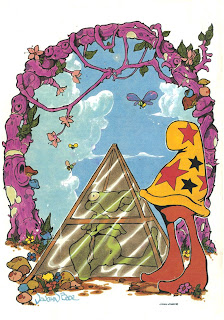 Like all of Bode's characters, Cheech lives in a vaguely fairy tale universe, but one in which the cute, friendly characters from your childhood have become socially, sexually & intellectually self-aware. Cheech is completely at ease in his richly detailed world, and understands the rules totally. There are no heroes or villains here, no grand battles or epic quests to be fought. This universe is populated by the foot soldiers, the shmoes meandering through life, trying to make a buck. And Cheech, being smarter, quicker and with infinitely less morals than anybody else, is generally the one who comes out on top.
Vaughn created Cheech at the age of 15, or thereabouts, the inspiration coming from an unlikely source: " I was sitting at my kitchen table in Utica, New York, trying to think of a name for a ridiculous hat character with legs. A jar of Italian Chee Chee nuts was on the table "
Cheech was a recurring character in Vaughn's life, at first appearing in his college newspaper at Syracuse University, in stories paralleling Bode's own college experiences. But the mystic fraud found his true home in the pages of The National Lampoon. By this point, Vaughn had developed his own style of cartooning he called 'Pictography' where frames appeared like animation cells, with dialogue outside the storyboards. His work does, in fact, have the impression of watching a beautifully rich & ambient adult cartoon.
Cheech had matured too, in a way, having been thrown out of Sorcerer University, and struck out on his own. Here he is with his ever gullible apprentice. 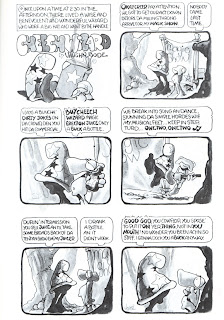 One of Bode's favourite themes is the proliferation of religious & spiritual fakers always willing to bleed another sucker dry, and the suckers only to eager to let them do it. Cheech is, obviously, a master of the art, repeatedly laying it on the line for his apprentices that everything he says is absolute bullshit, or to put it another way: If you wanna be th' Wizard's apprentice, you is gonna get kicked in the ball's a lot... 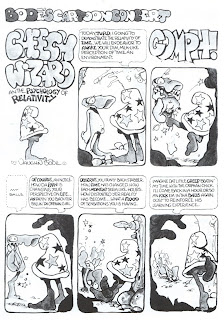 Cheech's attitude towards women is completely, utterly deplorable, but as his attitude toward everybody is equally appalling, no surprise there. And again, they keep letting him do it. Wearing a magic hat does seem to work for some people. 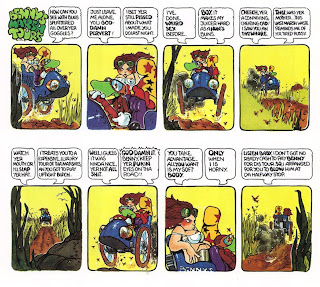 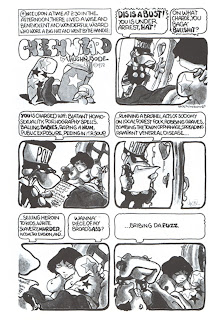 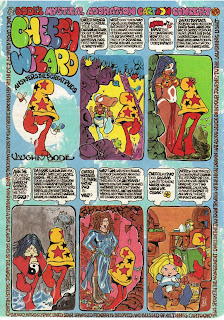 Cheech is, at heart, one of the great philosophers. The only problem being, when he actually does say something worthwhile, there's usually no one around intelligent enough to get it. 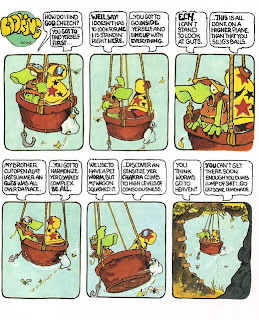 And here's what might be the greatest Cheech Wizard strip of them all, where Vaughn himself enters Cheech's universe, expecting adoration and finding, well....the reason why Cheech is still one of the greatest cartoon characters ever created. 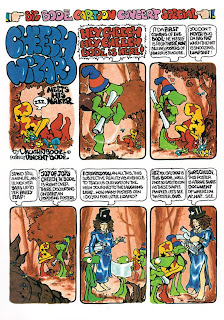 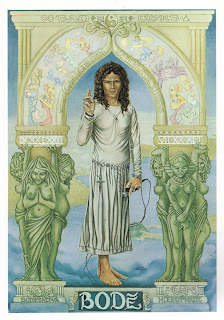 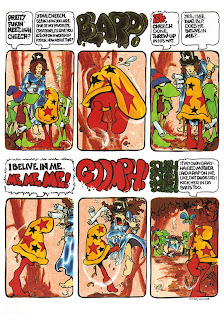 Cheech did make one final appearance, in a series of strips Vaughn did as samples to get his creation syndicated in national newspapers. It's Cheech-Lite, with all the social & sexual satire swept offstage, and a lot of fans loathe them, but I think they're still full of the charm and love that Bode clearly had for his characters. 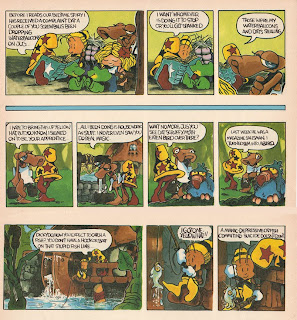 Vaughn Bode spent a great deal of his life searching for 'The Truth', trying different religions, different sexualities, different realities in his quest, and his work is a huge part of that, impossible to separate from his life story. ( And by the way, why isn't there a proper biography? Or even a movie? Imagine a movie of Bode's life?! ) To him, Cheech and all his pals were real, they all existed in some other part of the multiverse somewhere. He was just the conduit that let us look into those worlds. I love the stories of Bode taking his son Mark out into the garden, pointing at a little hillock in the distance, and telling him that was where Cheech lived, and that if you looked hard enough, you might just catch a glimpse of him. That intimacy, so obvious in his work, is why he's still remembered and why he's still being discovered. That, and the fact that his art is just stunningly beautiful. To Vaughn, all his characters really exist, and only stop being real in the conventional sense, when we stop reading. As soon as we open up the book again... 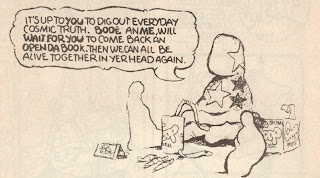