Does anyone know anything about this? In the back of the collected Alter Ego Vol. 1, is an interview with Gil Kane, along with this page of artwork. Apparently, Jason Drum was a strip published in Belgium in 1979, but I don't know anything else about it. I know Gil at least started a third Blackmark book, so maybe it's that, or a version of that. After all, the lead character is the spit of Blackmark, and the other guy looks a lot like his arch enemy. Plus the creatures they're riding are the same. Any ideas? 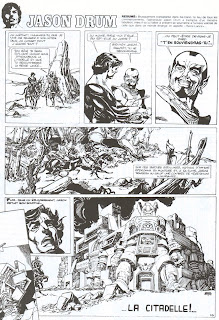