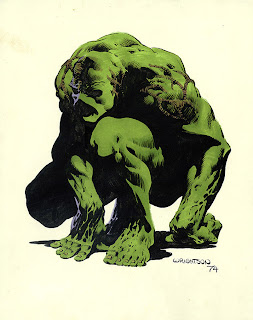 Recently, my old buddy ( and ex-Kid Of Rec. Rd ) David Holman was passing through Norwich, and natch, took the opportunity to go through my bookshelves like a pack of locusts.
Dave is, as everybody who knows him is aware, a Marvelite through & through since birth. Which is, of course, a fine & splendid thing. However, this means that HE HAS NEVER READ, to pick a few titles at random, Manhunter, The Fourth World, The Spirit or Swamp Thing.
Bearing this in mind, I made sure he didn't leave mine without taking, at the very least, these four books. So if you're reading this, Dave, here's why you should be reading my copy of Swampy! 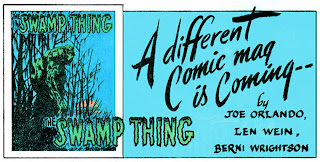 Swamp Thing was, of course, considered a classic comic long before Alan Moore rejigged it into the must read book of the '80's. The original Swamp Thing series, the one that defined The Bronze Age as much as Manhunter, Green Lantern / Green Arrow or Tomb Of Dracula, had it's roots in a little 8 page strip that appeared in Joe Orlando's horror title House of Secrets.
In the early '70's, Len Wein & Gerry Conway were rooming together, both having moderate success breaking into the business. In a coincidence they've always sworn is true, both writers came up with an idea for a strip about a swamp monster at exactly the same time, and independently of each other. Gerry sold his creature, Man-Thing, to Marvel. Len's script, a victorian melodrama about a scientist murdered by a jealous rival, who comes back as a slime-dripping spectre, was placed to go into HOM, but it needed an artist.
One weekend, so the story goes, Wein was at a party at lifelong buddy Marv Wolfman's house, when he & Berni Wrightson found themselves talking about the depressing state of their lives.
Wrightson had just suffered an acrimonious split from his girlfriend, and Wein suggested his gloomily romantic story as a method of catharsis.
In order to get the piece done on time, Wrightson roped in all his friends to pose for photos: Mike Kaluta played the villain, Louise Jones ( later Simonson ) the heroine, Jeff Jones & Alan Weiss the supporting cast, while Wrightson himself bagged the role of the hero.
Swamp Thing appeared in House Of Secrets 92, and then everybody promptly forgot about it. 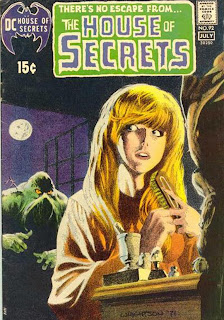 Until the sales figures came in. HOM 92 was DC's best-selling book of that month. And when the fan mail started pouring in, Orlando & publisher Carmine Infantino immediately pressed Wein into thinking about a series. At first he refused, considering the tale too personal to be diluted by spinning it out. But after a year of cajoling, Wein realised he didn't have to stick to the original plot. By using the title and the basic origin, Swamp Thing could be brought forward into the present day as a completely different character. After persuading a skeptical Wrightson that it would work, the book was off and running. 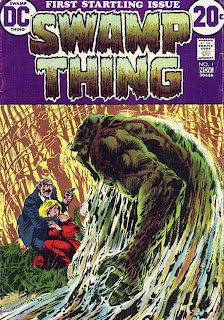 Swamp Thing is, of course, the story of Alec Holland, a scientist working on a serum to speed up the evolution & production of plant life. Secreted away in a lab in the swamp, Holland and his wife Linda's only link to the outside world is security agent Matt Cable.
However, just like Man Thing's Ted Sallis, others are interested in Holland's formula, in this case, the mysterious Conclave. The Conclave send a couple of henchmen, led by an oily creep called Ferrett, to convince the good doctor to sell his secrets to them. Naturally, he refuses. Equally naturally, Ferrett sets up a bomb in the lab, which goes off, covering Alec in his bio-restorative serum, and sending him screaming into the swamp.
No prizes for guessing what happens next. 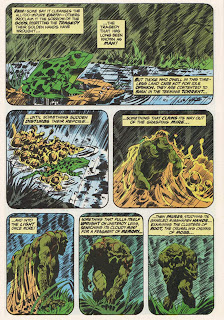 After finding Linda dead at Ferrett's hand, the transformed Holland goes after The Conclave's henchman, and exacts his bloody revenge, but Matt Cable, having missed the whole thing, grabs the wrong end of the stick and assumes that this gruesome creature murdered his friends as well. The chase is very much on. 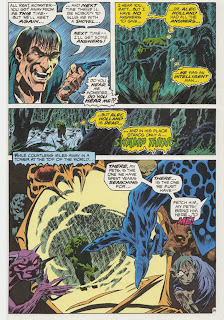 Throughout the series, we follow Holland / Swampy around the world, Cable in hot pursuit, as he encounters:
Arcane, a mad scientist surrounded by his hideous Un-Men in a doomed, gothic castle, who offers Holland a cure, but at a terrible price: 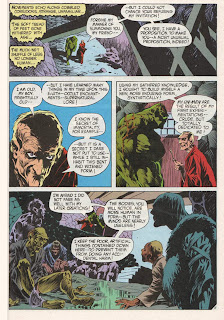 The Patchwork Man, a Frankenstein-like Monster who is actually Arcane's transformed brother, as well as love interest Abby Arcane's father: 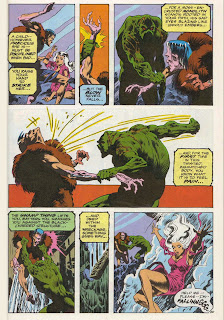 A tragic werewolf in the Scottish Highlands: 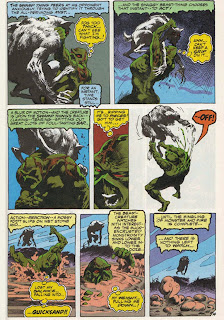 A mob of witch-burners, and the witch they intend to burn: 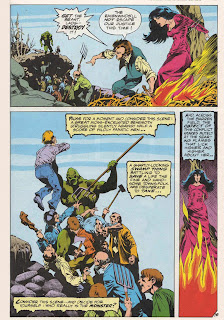 A town full of clockwork robots: 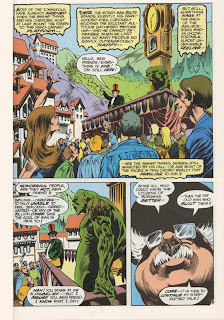 A certain Caped Crusader on the streets of Gotham: 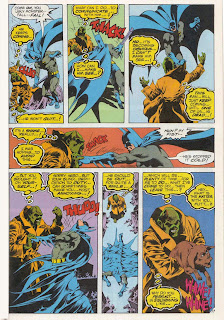 An H.P. Lovecraft inspired creature from beyond the universe: 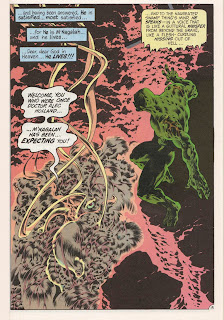 A stranded alien traveller, and the marines who want to catch it: 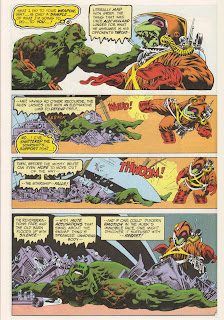 And finally, the return of Arcane & his Un-Men, along with a whole graveyard full of ghosts, in an episode that closes Wrightson's run nicely. 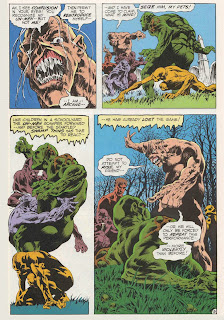 Wein's script's are wonderfully strange and odd, and you're clearly in a different world than the rest of the DC universe ( apart from that one notable exception ). He also handles the potentially cliched aspect of Holland's lost humanity extremely well, as you really do feel for the big green lug. But what everybody remembers this series for, is of course Berni Wrightson's artwork.
Berni had been regularly contributing one-off tales to House Of Secrets & House Of Mystery, but this is where he blossomed ( or should I say festered ) into a fan-favourite artist. Every single character in Swamp Thing looks off-kilter and slightly deranged, even the good people like Abby & Cable. All except Swampy, who Wrightson infuses with a gentleness & intelligence that lets you know there's still a person under that muck-encrusted mockery of a man.
And he really goes to town on the settings and the monsters. This is an artist unleashed, and enjoying every minute of it. Once again, you are clearly in another world, a darker, sicker one dripping in ichor & dread. Worth mentioning also, is the superb lettering design by Gaspar Saladino, denoting Swampy's dialogue and narration in slime dripping borders.
The team only lasted on Swamp Thing for ten issues, Wrightson complaining that it was turning into a 'monster of the month' book, and though that's certainly true, there's something primal going on here, plus the sub plots are enough to make it seem like one continuous story, with at least a partial ending. The book continued on for a while, of course, under the hands of greats like Nestor Redondo, until it was eventually revamped by Moore, but if you haven't read this, you really need to.
It's a true classic, and you can read it in Swamp Thing: Dark Genesis. 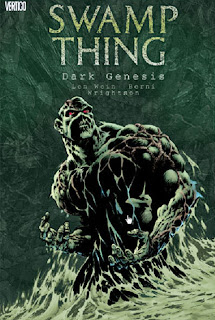