Back in 1978, the prime contender for best superhero film ever done, Superman The Movie, was released. Back then, there wasn't anywhere near the amount of merchandising that exists today for a film. Once you'd seen the latest blockbuster, all you could really buy as a souvenir was the 'official novelization', which nearly always seemed to be written by Alan Dean Foster. And obviously there was no "If I miss this movie, I can catch it on DVD"either. In England, once a film finished it's run at the local cinema, it might be 5 to 7 years before it turned up on TV, if it ever did, so each new movie was a genuine event, particularly if it was the first real comic book movie. So everybody bought Superman Last Son Of Krypton.
Unlike every other 'book of the movie', tho', this one had almost nothing in common with it's parent film, but it was, for my money, easily the best novelization of a comic book hero ever. 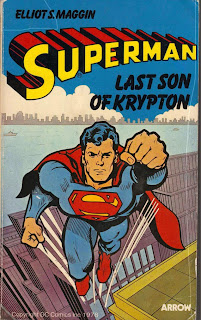 Last Son Of Krypton begins with an interesting new twist on the origin, as, prior to sending baby Kal-El to Earth, Jor-El sends a robot drone with the express purpose of locating the 'most highly developed intellect on the planet', and entreating whoever it finds to look after his infant son. The mysterious old man the drone encounters follows the coordinates to Smallville, intent on getting to the crash site of the ship. But once there, a new plan begins to form and, through a chance meeting with Jonathan & Martha Kent, the kindly professor engineers that they be the ones to find baby Kal-El. 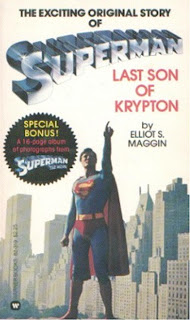 Jump forward to now, and ace TV reporter Clark Kent, star of Galaxy Communications, is preparing for the evening broadcast. Meanwhile, at Princeton University, Jimmy Olsen is covering the opening of a vault containing some mysterious papers left to the world by Albert Einstein. Naturally, Lex Luthor, having just broken out of jail for the fourth time that year, shows up and steals the priceless papers from under everybody's noses. Including Superman's, who's suckered into stopping a decoy bank raid over in Metropolis. 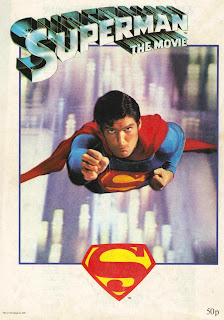 Simultaneously, on the planet Oric, others' are becoming interested in Einstein's papers, including Towbee, the mad, four-armed minstrel/poet, and the shadowy Master of Oric, who controls all trade on the gigantic commerce planet, and therefore most of the rest of the galaxy. While, on Oa, the Guardians of the Universe are watching everybody. 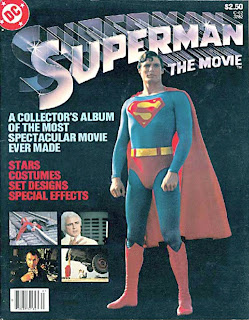 Having got the case containing the papers open, Luthor is more than a little annoyed that they seem to be in a completely unknown language, which even he is incapable of translating. So, he breaks the world's foremost philologist out of prison, to get him to crack Einstein's code. Unfortunately for Luthor, the translator is actually Towbee in disguise, who, without as much as a by-your-leave, suckers Luthor into giving him the papers, and is pretty soon off on his merry way back to Oric with them.
At this point, the Guardians decide to get involved, and dispatch The Old-Timer, the Guardian who became human, to enlist The Man Of Steel's assistance. Having told Superman that the papers are on Oric, and that that particular planet has a blue sun, thereby reducing the Kryptonian's powers, The Old-Timer suggests that he might like to take along some help. Say, somebody with an understanding of Einsteinian physics?
By the next chapter, Superman & Luthor are on their way to Oric. 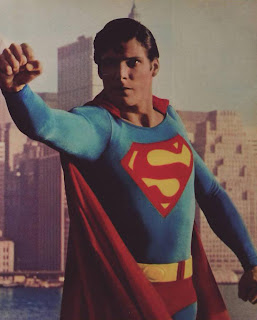 The Master meanwhile, having also been unable to translate the papers, is trying to make a billion year old prophecy relating to both he & Superman come true, and, using Einsteinian laws, alter the entire fabric of time /space for his own benefit. After semi-allowing themselves to be captured, Luthor & Supes kick-start the process ahead of schedule, thereby forcing The Master ( now, obviously, revealed to be the mad minstrel Towbee ) to head for Earth for a last ditch attempt at salvaging his galaxy conquering plan. 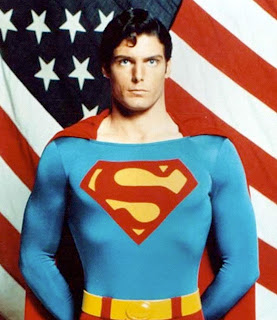 In a final battle in Galaxy Communication's control room, Superman manages ( just ) to beat the insane Towbee/Master, and the galaxy is safe once more. Though not in exactly the same form as it was. Leaving Superman, at last, to be the one to read Einstein's papers, he being the only one who could ever possibly understand them & they being of no use to anyone else in the galaxy. 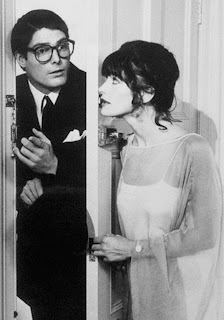 Quite apart from the plot, there's so many great things to enjoy in this book, from the spot on characterization of Clark/Superman and Luthor, and the way their hate/hate relationship works ( understandable, as Maggin wrote the Superman book for something like fifteen years ) to little snippets like The Old-Timer's cosmic indiscretion of appearing before Clark Kent, and saying: " Kal-El, May I speak with you for a moment? ". Or the scene where Lois Lane is asked to picture herself about to die in a collapsing mine shaft, and realizes that she wouldn't cry, scream or make her peace with God, but instead would wonder what was taking Superman so damn long. 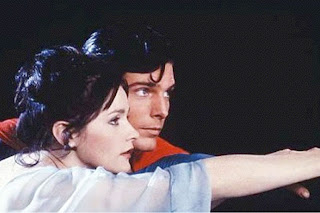 And Maggin's fast-paced, two-fisted style of writing makes the whole thing zip along, even when he, for instance, interrupts the main plot to go back and relate how Luthor & Superboy first became enemies in Smallville. And finally, there's The Master's mind-crushing plan, utilizing Einsteinian physics in such a way that, if you're paying attention, leaves the reader much less sure of reality, and how the universe works, than before.

You used to be able to read this book for free, along with it's successors Miracle Monday & Starwinds Howl on the Superman Through The Ages site. Alas, they've been closed down now, due to copyright infringement. Best get on ebay then! 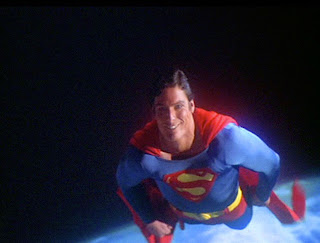