Stories We Never Got To See: Kestrel Falconer 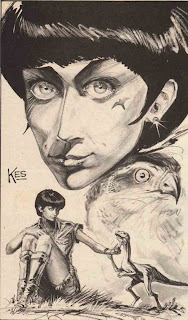 And here's Steve's breathless precis for his story: 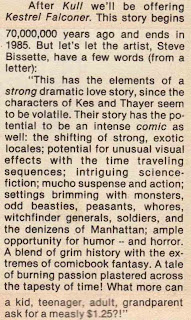 Me, I was sold. I couldn't wait to read this thing. Unfortunately, it never happened. Time passed, Denny O'Neill took over editorship of Bizarre Adventures, and Kestrel Falconer was never mentioned again. So what happened? 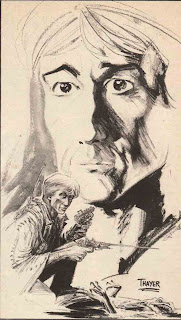 Well, it's one of those fascinating sidenotes in comics' history, that shows how often we don't get to see potentially interesting projects.
According to an interview Bissette gave to Rich Arndt in 2005, Lynn Graeme was what you might call a 'hands-on' type of editor. Over to Steve: " Any time she would accept an idea I proposed, she would want to write it. " The idea of the lead character Kes was that she had the ability to travel through time, without the aid of a time machine. Steve again: " My premise was that she was following this young man who was a scientist through time. The 'hook' was that he was causing all the mass extinctions ( as a result ) of his experiments. There was also a romantic hook, in that he was very handsome, quite charismatic, and Kestrel was attracted to him, but repulsed by his amorality and sociopathic behavior."
Graeme apparently loved the idea, but wanted to do the script herself. She proposed a further twist, where Thayer was a racist, intent on wiping out african-americans, moving the story more into the modern day and away from the prehistoric scenes that Bissette actually wanted to draw. Begrudgingly, he agreed to the changes.

Months passed without a script arriving however, as Graeme & Bissette communicated back and forth, she demanding artwork, he replying that he still had no script to work from. By December, Lynn Graeme had left, or was pushed, from Marvel, and didn't work in the industry again. According to Bissette, Kestrel Falconer took place at a strange time for Marvel, with people being hired & fired all over the place, and I'm not disparaging Lynn Graeme at all here. ( In fact, I'd love to hear her side of the story ) But it is a shame we never got to see Kestrel Falconer, 'cos it sounds great.
Posted by pete doree at 01:55