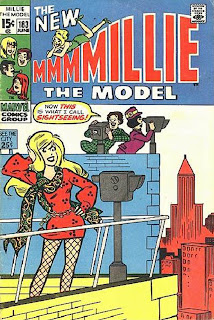 Millie The Model was the comic we always pushed aside to get to that months' Spider-Man or Avengers. Firstly, it was an ( ick ) girl's comic, secondly it was about fashion, and thirdly, for an alleged humour comic, it wasn't actually funny.
Yet, in the same way that, after having spent the afternoon swapping comics with your buddies, you found you still had two copies of Human Fly no. 4 in your collection, I always seemed to find the odd copy of Millie The Model at the bottom of the wardrobe. Maybe Dr. Wertham put them there, I dunno.

Anyway, I was already reading Debbie Little's copies of girls' weekly Spellbound, 'cos it had Enrique Romero's Supercats in it, so Millie wasn't that much of a stretch. If you like comics, you like all kinds of comics. 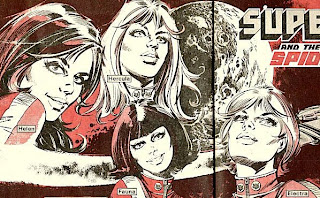 Plus, I always liked what little I saw of Stan Goldberg's art on Millie. It's a style of cartooning that you don't really see anymore, reminiscent of american ad campaigns of the late '60's, or sitcoms like Bewitched, where harassed husbands rushed off to the office, and worriedly had their boss over to dinner, while their impossibly beautiful wives happily bustled around their perfect houses. 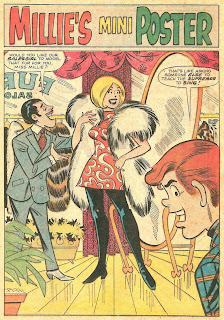 Stan's art on Millie also has that achingly groovy '60's look to it, as the characters pose in their fab, hip & gear outfits. It always instantly transports me back to watching The Monkees & The Banana Splits every saturday morning for the whole of my childhood. 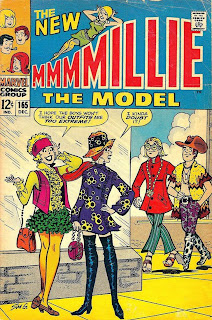 Plus, of course, it takes a huge amount of skill, to make cartooning look this effortless. Like Sergio Aragones, Goldberg's work looks like he did it in five minutes and it still came out right. The mark of a master. 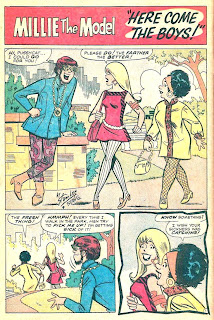 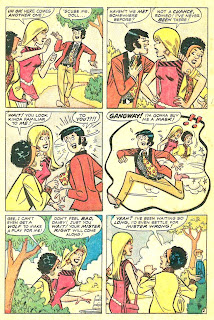 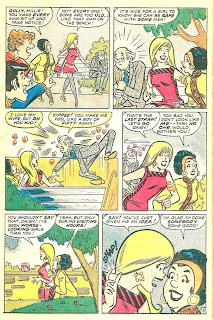 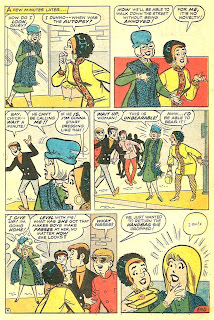 Given the choice, tho', I prefer Chili, Millie's red headed rival to the comic book fashion queen crown. Millie's a little too white bread, girl-next-door for me. Whereas Chili is clearly trouble with a capital ' T ' and an absolute bitch of the highest order, so, bizarrely, I like her better. Hmm, is that why I'm still single? 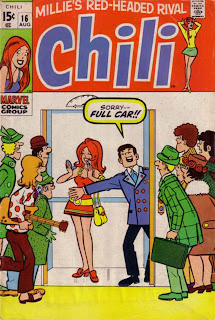