Oh No, It's The Human Fly

We're not always gonna look at the great stuff here on this blog. The Bronze Age produced it's fair share of hounds too. Remember this? 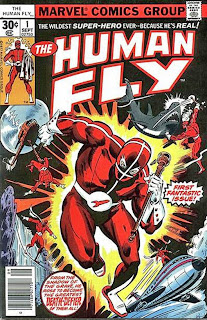 This particular literary classic was all about a mysterious man ( whose face, a la Dr. Doom, we never saw ) who was completely paralyzed, but who, through sheer force of heroic will, managed to get his mangled muscles and bones working again, to become TADAAA the world's first crime-fighting stuntman!!!
As I remember, The Fly seemed to spend an inordinate amount of time at the hospital, standing over the sickbeds of terminally ill children, promising little Timmy or Sally that he was gonna make that cycle jump for them, dammit!
The whole thing was based on a real-life stuntman named Rick Rojatt, who did dress up in that costume for his stunts. In fact, I dimly recall seeing him strapped to the top of a 747 on ITV's World Of Sport one rainy Saturday. I guess Marvel's budget at the time didn't extend to an Evel Knievel comic.
This pulse pounding premiere issue was written by poor old Bill Mantlo, and drawn by Lee Elias, one of those great old Golden / Silver Age artists who, sadly, never seemed to get enough work in the '70's.
And even with the benefit of nostalgia, it wasn't either man's finest hour. And no disrespect to Rick, but I'm sure he wasn't hanging around kid's hospital's too much. Drinking his own bodyweight in beer & checking out lingerie model's more like. 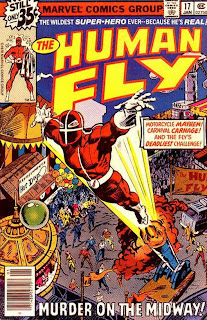 Back in the Bronze Age, me & my friends'd buy The Human Fly. 'Course we would, we bought EVERYTHING. But only when there was absolutely nothing else left in the shop. And we still hated it.
Flash forward to the con I mentioned in the previous post, and me & Dave & Sean are rummaging through the comic bins. I spy Human Fly No. 1. I hold it up, without saying a word.
They both as one, go: "Aaagh! Noooo! The Human Fly! Put it back!"
Later on in the day, I overheard at least two other groups of friends go through the same routine. Clearly, this is something we as a comic nation need to purge ourselves of.
Hey Marvel! How about an Essential Human Fly? No! Wait! I was kidding! Oh shit.....
Posted by pete doree at 10:32