The Godlike Genius Of Bob Haney 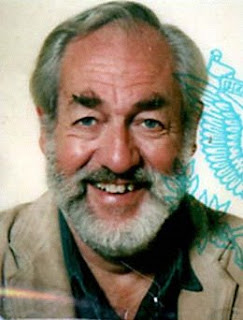 So we haven't talked about Bob Haney yet. For the uninitiated, Bob Haney was a writer for DC throughout the '60's & '70's. He wrote loads of things, but most of us remember him for two series in particular, the first one being The Brave & The Bold. This was DC's premiere 'team-up' book; the premise being that every issue, Batman would team up with another character from the DC universe and have an adventure. The guest star in that month's issue could be anybody, from Swamp Thing to The Joker to Kamandi, The Last Boy On Earth and all points inbetween. 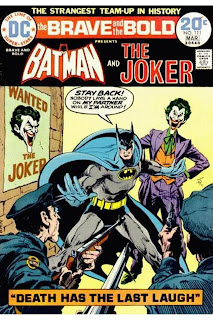 The Brave & The Bold had four major selling points to attract any Bronze Age fan to shell out for a copy:
Firstly, it starred Batman. And everybody loves Batman. Secondly, you got a different guest star each month: It might be a character you liked, it might be a character you'd never heard of, it might even be a character you hated, but at least it'd be somebody different, each & every time.
Thirdly, The Brave & The Bold was drawn by Jim Aparo. And, on this point, it's really simple. If you don't like the artwork of Jim Aparo, you don't like comics. The sky is blue, the grass is green, Jim Aparo rocked. IT IS THAT SIMPLE.
And fourthly, it was written by Bob Haney.
And Bob, unlike pretty much every other comic book writer in the history of comics, didn't give a stuff for realism, or continuity, or even as basic a thing as logic. Bob's stories take place somewhere that could only be called ' The Haneyverse'. When you read one of his scripts, your first instinct is to go: " What?.....But....what? But this doesn't make any...But I....WHAT??!!! " until you look at the credits. Then you go 'Ohhh, It's a Bob Haney story. Oh, well, ok, if you'd just said that to start with...'

You want proof? Ok, how about Brave & The Bold 84, where The Caped Crusader teams up with Sgt. Rock. Batman lives in the modern day, right? And Sgt.Rock? His adventures take place in the environs of World War Two, yeah? So the only way these two could feasibly meet would be through some sort of time-displacement, wormhole doohicky thing. Yeah, for any other writer. Bob? He just has Batman say: " Oh yeah, back when I was in World War Two, I met Sgt. Rock. Here's the story. ", thereby contradicting 40 years of comics' continuity. 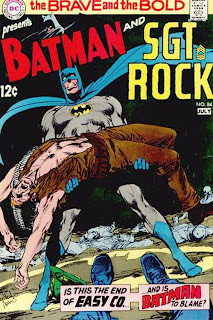 And don't even bother with the fanboy argument:'Oh yeah, but Pete, you know that was the Earth 2 Batman, not the one from current continuity' Errm...........NO!
Firstly, this is Bob Haney, you know he'd never even heard of Earth 2. Secondly, Bob brought back Sgt. Rock several times in the pages of Brave & The Bold, all in stories set after WW2, all featuring the same Batman from the first story. Thirdly, and most importantly, THIS IS BOB HANEY.
This is the guy who had Batman DIE, then have The Atom shrink to microscopic size, jump inside Batman's brain, and move his corpse around like a zombie to find out who'd murdered him. 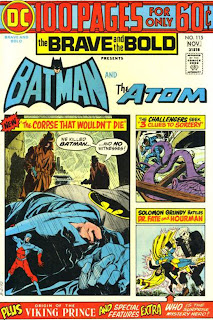 This is the guy who had The Flash run up the side of a building so fast, he can accelerate all the way to The Sun & back, bounce off an asteroid belt, and get back to Earth within 7 minutes, all without asphyxiating in the vacuum of space. 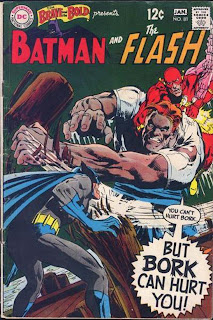 THIS is the guy who had Batman: Sell his soul to The Devil/willingly turn himself into a vampire bat/discover the exact day of his own death/get possessed by the ghost of a one legged seaman who's stuck in purgatory with Batman's parents, and about a million other even more bizarre ideas. THIS, ladies & gentlemen, is The Haneyverse, and I suggest you enter it immediately.
It's available at: Showcase Presents The Brave & The Bold Volume's 1, 2 & 3. You know it makes sense.
Posted by pete doree at 17:46

Labels: batman, bob haney, the brave and the bold