My All-Time Favourite Comic Book Ever


Hey, thanks for asking. Well, this may appall some of you, but it's not one of the 'classics'. It's not Manhunter, or Swamp Thing, or even Brother Power The Geek. (All of which we'll get to, don't worry.)
My favourite comic isn't thought of as one of the greats, or even thought of at all. In fact, I doubt more than a handful of people even remember it. And here it is: 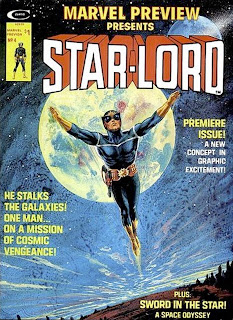 Marvel what? Presents who?? Well, hang on...
Marvel Preview was what's known as a 'try-out' book, where those busy armadillo's up at The House of Ideas would launch a new character in each issue, in the hope that we Merry Marvelites would like said character enough to bless them with their own regular strip.
You never knew what you were gonna get when you picked up a copy of Preview. One month it'd be Blade in his first solo adventure, the next Satana, The Devil's Daughter would rear her non-Comics Code approved head. They even tried Sherlock Holmes, but nobody went for that one.

Anyway, in the halcyon year of 1976, my family and I had just moved from my childhood home of Haverhill, Suffolk all the way down to the city of Wells in Somerset.
This was a bit of a shock to my 11 year old self, to say the least.
Wells seemed to be full of strange, new, odd people. People who talked in a bizarre, country accent, and spent far too much time gazing at the sky than seemed healthy.
Still, much to my relief, they did sell comics here, so it wasn't all bad.
I ended up getting my monthly fix in a newsagents right at the top of Wells high street. If you've seen the movie 'Hot Fuzz' you've been in there too. In the film Simon Pegg goes in there a couple of times to buy ice cream. The magazines are shelved all along the left hand side of the shop.
What's astounding to me is that, in the film, the shop looks exactly the same as it did in '76.
But, hey, that's Somerset, I s'pose.

So there I am, in a strange new world, desperate for entertainment, when I walk into the newsagents, and see that cover.
" He stalks the galaxies! One man...On a mission of cosmic vengeance! "I defy any kid not to grab that puppy off the shelf, fling your money at the counter, and run all the way home.
So who is Star-Lord? Well, he was created by ace scripter Steve Englehart, and I know everybody raves about Stainless Steve's work on Dr. Strange & Batman, and rightly so, but this is the best of his '70's work for me.
The art is by Steve Gan, a criminally under-appreciated artist who was part of the Phillipines brain drain both Marvel & DC brought us during this period.

Star-Lord himself is Peter Quill, and we first meet him on the night of his birth, when his father, convinced that the child isn't his, carries the newborn out to the woodpile, intending to put an axe through baby Pete's head.
Luckily, dear ol' dad suffers a fatal heart attack before committing the foul deed, and young Peter is left on the ground, gazing up at....the stars.
Cue opening credits & dramatic music.

Peter grows up, but he grows up weird. It's suggested that his mum is, if not insane, then at least slightly disturbed: 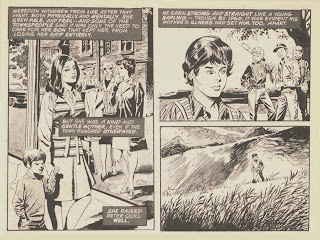 Still, Meredith & Peter continue along in their dysfunctional way, until, one day, while walking in the woods, THIS happens: 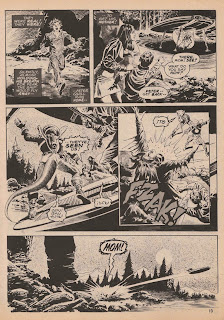 Pete tries to tell people what happened, but, natch, no one believes him. That weird Quill kid?
He's always off in his own world, no wonder he sees spacemen. 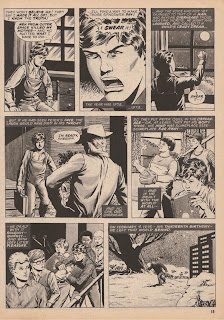 So, our angry as hell hero goes through life in a rage, his sole purpose to become an astronaut, and get out there into the universe and find those lizard faced bastards who murdered his mum.
Really, this guy's so single minded, he makes Batman look like a wishy washy ditherer. Along the way, he makes few friends. ( Ok, no friends. ) Case in point: 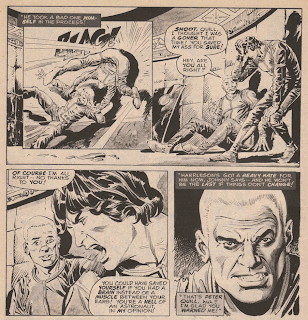 Remember that guy Harrelson. He's not a guy you wanna cross. Anyway, prickly young Mr. Quill ( see what they did there? ) continues to rise in the ranks of the space force, until the historic day when Earth's first space station is to be manned. The lucky astronauts are named, but: 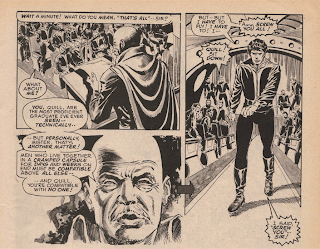 After dealing with this disappointment in his usual, calm manner ( ie. getting blind drunk and smashing up his apartment ), Pete knuckles down, and, after only a year or so of apologizing, finally gets to go the space station, where, in front of the assembled dignitaries of Earth, THIS happens: 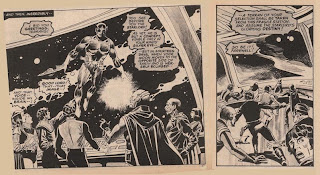 Clearly, somebody needs to get out there and accept all the power in the universe. Guess who volunteers? Unfortunately, the saps in charge don't know a good thing when they see it, and, anyway, they're sure as hell not gonna send somebody like Peter Quill as the best representative of humanity. Dealing with this rejection in his usual, mature manner ( ie. throwing a hissy fit ), Pete is soon shoved in a prison cell, along with a one way ticket back to Earth. To add insult to injury, that goon Harrelson is chosen to go on the mission. Would you stand for that? Pete neither: 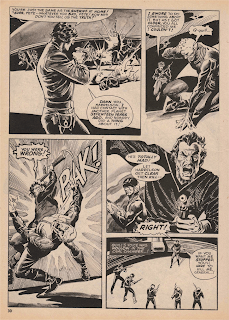 Just when all seems lost for our ( let's face it ) fairly disagreeable hero, he promptly vanishes into thin air, only to find himself a universe away from earth, on an unnamed planet, in the company of ( are you ready for this? ) GOD himself. 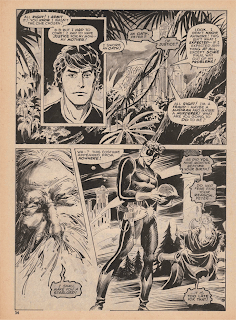 God promptly outfits Pete with a weapon that draws it's energy from the four elements, and, transporting him across the universe again, Pete takes his revenge against the loathsome alien's who killed his Mum. Or does he?
The ending is ambiguous, promising redemption for Pete, but also leaving a whole ton of questions to be answered. Unfortunately, they never were. At least not satisfactorily.
Steve Englehart left Marvel soon after publication of this epic, leaving Star-Lord in the hands of lesser writer's ( Yes, Chris Claremont, I mean you ), who changed the character beyond all recognition, and came up with an incredibly lame explanation for the back story.
A shame, as it was a unique origin story, and could've been a unique series.

For me at the time, plonked in a strange new environment, it was obviously helpful to read about a hero that was even more alienated and annoyed than I was. And, as any psychiatrist'll tell you, your favourite things are all about when in your life you first experienced them. Both very big reasons why this is my favourite comic. But all I know is that I've kept this comic since 1976, and reread it more times than any other I own. Even with an unprejudiced eye, I still think it's a stunning piece of characterization, with superb, understated art.
Alas, it'll probably never be reprinted, unless Marvel do an Essential Marvel Sci-Fi or something. But if you see this issue on ebay, grab yourself a copy. You won't regret it.
Posted by pete doree at 05:34